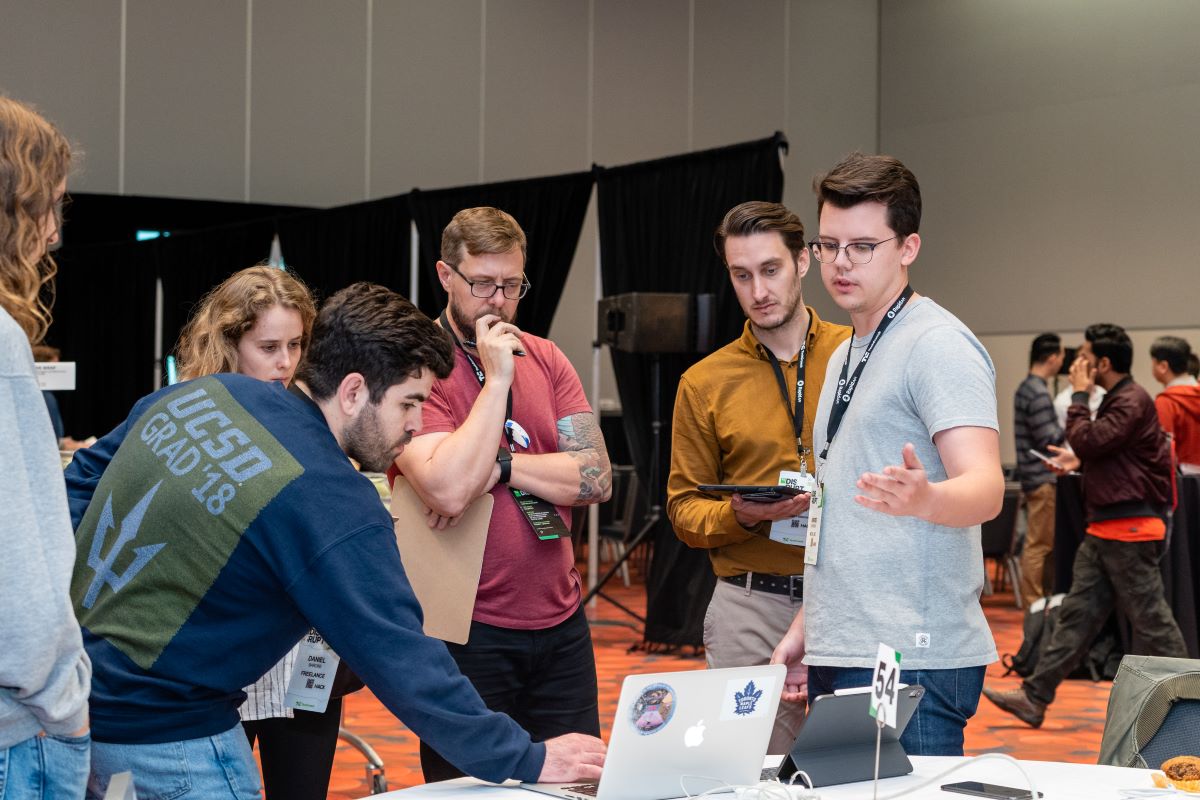 The four students, joined by fellow developer and friend Daniel Barone, decided to take the plunge and sign up for the TechCrunch Disrupt San Francisco conference, and managed to get accepted into the event’s hackathon. Disrupt hackathons have had significant success – as one of the biggest startup conferences in the world, it’s seen some overnight creations ultimately being acquired for large sums.

This year’s hackathon sold out with 800 participants. After an exhausting two days of working on a solution, teams had two minutes to present to judges in a science-fair style.

Ten finalist teams were invited to the next round: a demo on the Extra Crunch stage. The students, currently in CST third term, made it into the finalist group.

After pitching their idea Antibiogram: Powering the fight against superbugs with real-time data on stage, they placed second place.

The team worked with a sponsor company during the event, using their proprietary database technology to power the demo application and making some connections along the way.

Their creation connects doctors to the latest data, making it easier for healthcare providers to prescribe appropriate antibiotics and to avoid the dangers of over-prescription. They built in granular filtering features, as well as the ability to narrow location down as far as a hospital wing.

Team member Brodie explains, “Healthcare continues to be a very important issue. There were so many good ideas at the competition that we feel very lucky to have been noticed by the judges, but it might have been because we chose to focus on health.”

He adds, “Daniel Barone had this fantastic idea for an application. Dawson and Andrei did such an incredible job of presenting it. We really think that antibiograms are important and useful and I think that’s what helped us place.”

Scientists predict that, over the next four decades, anti-microbial resistance will overtake cancer as the leading cause of death.

Dawson, already a leader as student Chair of the Downtown Campus, says part of the motivation for going was to inspire more students to take risks, and network in environments that are out of their comfort zones. They have all completed hackathons before, which they recommend for the learning experience. They enjoyed applying the skills learned in CST in a competitive environment.

“We wanted to see how hard the competition was at a much larger event,” explains Dawson.

“We pretended that we were trying to start a company,” says Brodie, “and it started to feel like a real possibility.”

Listen to Dawson and Andrei talk about this medical data app with Lynda Steele on the CKNW Lynda Steele Show.

Spend lots of time during the hackathon developing the idea and the product. Don’t rush to the next steps until every member is 100% on board with the plan and you can all summarize what you’re building and why it’s better than the existing solutions ~ advice from Dawson and the team

“Remember to have a good time and explore opportunities outside of the competition itself,” emphasizes Andrei.

“Some of my favourite memories come from events that happened outside of the competition – we made new friends and had such a good time in San Francisco and the Bay Area,” laughs Brodie. “We’re very grateful to BCIT and the BCIT Student Association Student Competition Fund committee for their amazing support; without them, our trip would not have been such a success.”

“We’re definitely going to compete as a team again, be it at Disrupt next year or at another event,” says Dawson.

Keep up with the latest from BCIT Computing by signing up for Tech It Out quarterly newsletter.