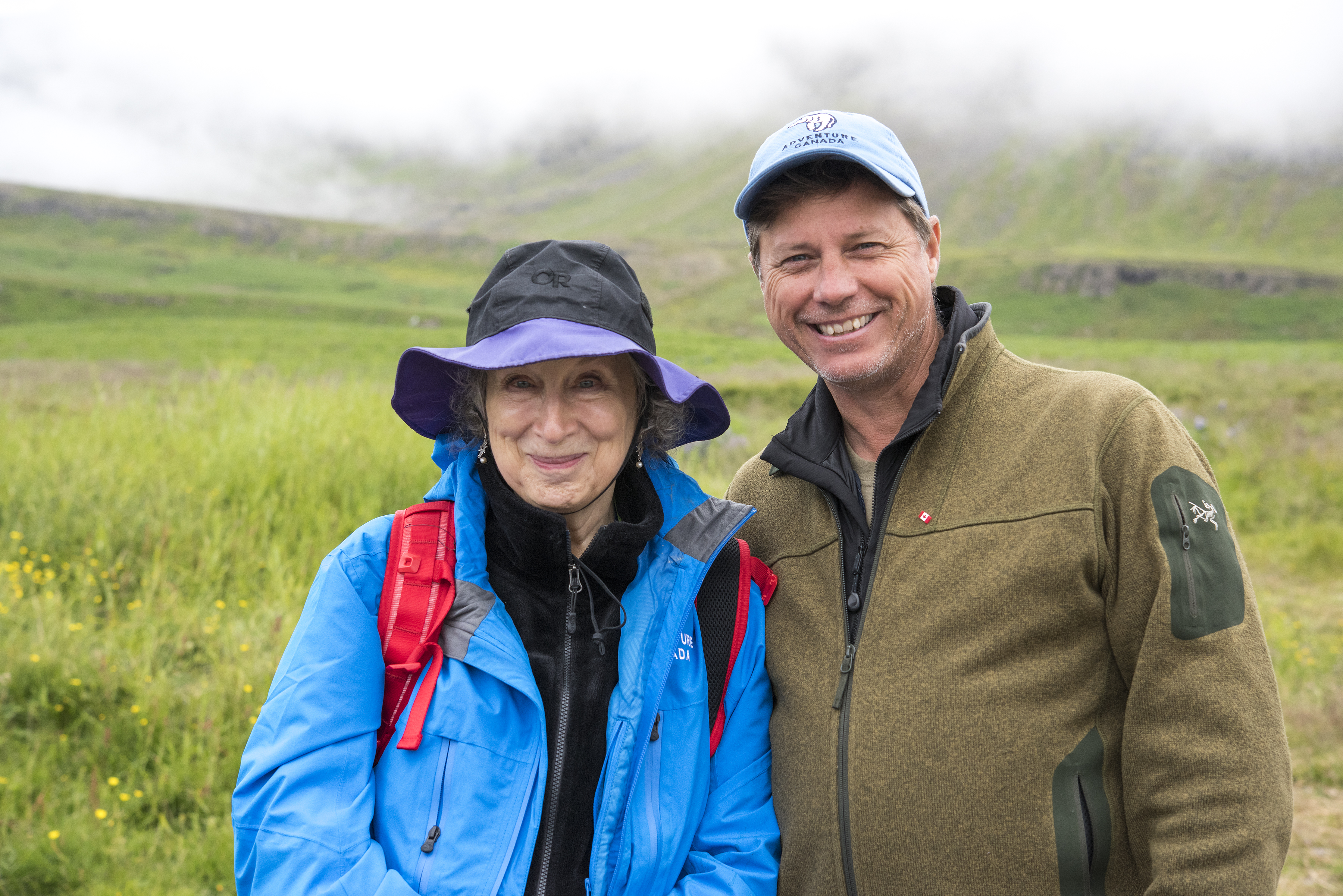 As a biologist, world traveler, wildlife photographer, and an instructor for the Fish, Wildlife and Recreation (FWR) program at BCIT, Danny Catt has spent more than three decades working in eco-tourism and adventure travel. Through his role as a naturalist and photographer, he has had the honour of knowing Margaret Atwood and her partner Graeme Gibson for nearly 20 years. They have traveled together on expedition ships in the arctic and, more recently, Iceland and a land-based trip in the Carribbean. Some of Danny’s favourite memories with Margaret and Graeme were when they celebrated their love for wildlife and support for literacy.

Celebrating a love for wildlife and literacy with Margaret Atwood

“Last summer, Margaret invited me to join her and Graeme to co-lead a number of her birding enthusiast friends, many of whom are supporters of the Pelee Island Bird Observatory in Ontario, to Trinidad and Tobago in March of this year. Fortunately, the dates aligned well with BCIT’s spring break and I took advantage of the opportunity to join them,” explained Danny.

During the trip, Danny, Margaret, Graeme, and friends visited nature reserves and other bird hotspots on these beautiful Caribbean islands. They were hosted by local bird experts who were incredibly knowledgeable about the natural history of the region.

Danny added, “We saw an incredible diversity of birds and other wildlife. As an ecologist the trip was a fabulous learning opportunity.”

“I have been travelling in the company of Danny for – can it be? — about 19  years, mostly in the Arctic with Adventure Canada,” said Ms. Atwood. “He is preternaturally good-natured, even when being doused with freezing cold spray, and although very well informed, he never hesitates to admit that there is something he doesn’t know — invaluable in the face of Nature. He was the Guest Birder at our SpringSong celebration of birds and writing on Pelee Island in 2019. He is good at improvising — handy for northern travel! — and always a pleasure.”

A guest birder at SpringSong 2019

Margaret invited Danny to speak at two events in May. One was a fundraising dinner for the Pelee Island Bird Observatory (PIBO), established by Margaret and Graeme in 2003. The other was an annual weekend festival of birds and words called SpringSong, which took place on Pelee Island.

Pelee Island is located in Lake Erie and is the southernmost inhabited island in Canada. PIBO is a non-profit charitable organization devoted to the study and conservation of birds and their habitats. PIBO has a banding station which is part of an international effort to monitor long-term population trends in migrant songbirds. SpringSong was started by Margaret and Graeme in 2002 and occurs annually in May as this is the height of the northern migration of songbirds. A Guest Author and a Guest Birder are invited to join this increasingly popular community event.

“I was honoured to be the Guest Birder this year. The Guest Author for 2019 was award winning Canadian author Steve Burrows, who has penned five Birder Murder Mysteries. Margaret asked me to do a short talk on the State of the World’s Birds and to highlight challenges and opportunities for their conservation in Canada and overseas. I gave my talk at both events in early May,” explained Danny.

SEE MORE: How to honour World Rivers Day, some thoughts from Mark Angelo

Bringing real-world experiences back into the classroom

Danny went on to share how life enriching the adventures have been. “I am looking forward to sharing my experiences and incorporating my learning into my courses in the Fish, Wildlife and Recreation program. I teach ecology, including the topic of migration, the roles of parks and protected areas in wildlife conservation and I do a module on eco-tourism and adventure travel. I find wildlife migration fascinating and just the thought that some of the birds we saw on Pelee Island, could in fact be the very same individuals we saw in Trinidad and Tobago is mind-boggling. Many of the migrants that winter in the Caribbean fly back up to Canada on a pathway that crosses Lake Erie and the first land to stop to rest and feed is Pelee Island.”

Danny recalled that back in Trinidad and Tobago, Margaret was tidying up the editing of her new book The Testaments which is the sequel to her award winning bestseller The Handmaid’s Tale.

“I jokingly offered to help with the editing if she would help me with marking some student assignments. Margaret graciously (yet sternly) declined. She did though sign the Convention on Reusable Cups which was prepared by second year students in the Fish, Wildlife and Recreation program. The convention asked all who sign it to commit to using only re-usable cups in the FWR classroom. Margaret was happy to sign.”