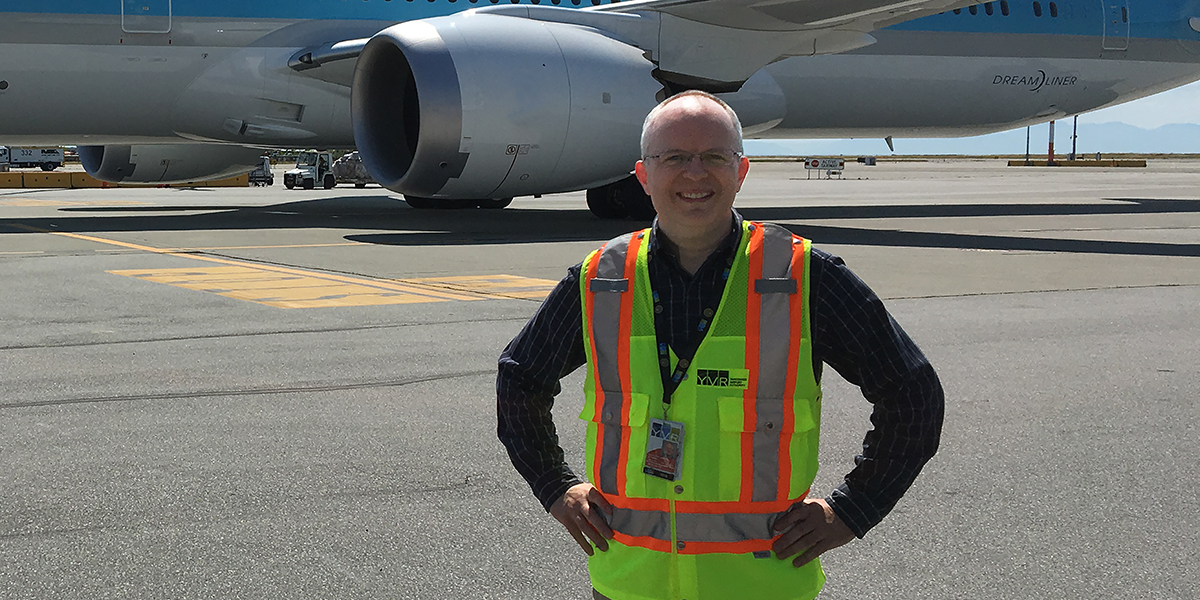 In 2015, Kenneth Lieblich found himself suddenly unemployed. In his early 40s, he had established a decades-long career in public policy and government, including working in the House of Commons and assisting former Deputy Premier and Minister of Finance Colin Hansen. His income supported his wife and their four children (two of whom have special needs) and paid his Vancouver mortgage.

“I panicked,” he recalls. “The organization that I worked with had a financial meltdown and let a bunch of people go. And I didn’t have any immediate job prospects.”

“I’d been working in government relations and public affairs for most of my adult life, whether it was in Ottawa, Vancouver, or Victoria,” he says. “But now I was at a crossroads. After losing my job, I wasn’t sure I wanted to do that anymore.”

That’s when his wife Lydia reminded him of his lifelong love for airports and airplanes. She came across the Airport Operations diploma program at BCIT, and invited him to attend an upcoming info session with her.

“We went and it was fascinating,” he remembers. “It sounded like it could be really exciting, but at the same time, it was concerning because this was January 2016 and they told me there was a two-year waiting list.”

Buoyed by the prospect of realizing a dream, Kenneth applied anyway. He was accepted into the program and began studying in the fall of 2017.

“My wife and children gave up an awful lot for me to do this, and that weighed very heavily on my mind when I was at BCIT,” he says, taking a deep breath. “It was a long time that we were without an income. We have four young children, two with special needs: my eldest has Type 1 diabetes and my son is blind. My family relied on me. I needed to make this count.”

If the pressure to support his family wasn’t already daunting enough, Kenneth says he was, by far, the oldest person in his class at BCIT. But it taught him a valuable skill.

“It was strange at first, but the teamwork aspect of the program gave me the chance to work with people who may be younger, have different experiences, and have different approaches to work,” he recalls. “Being able to work with so many different people has proven to be integral to succeeding on a day-to-day basis in my job.”

SEE MORE: The state of the Canadian aerospace industry: A roundtable with Jean Charest at BCIT

Kenneth became a senior advisor on government relations for Vancouver Airport Authority, a position he earned before even officially completing his program.

“The job is the perfect marriage between the knowledge I gained from the Airport Operations program and my previous life,” he says. This role acts as a liaison between the Vancouver Airport Authority and the federal government, and may be involved in any number of issues, including legislation around transportation, the environment, people with disabilities, borders, and US customs. The senior advisor focuses on the cause of the flying public, working with airlines and the federal government to make flying a more pleasant experience for everyone.

After achieving a 95-per cent average at BCIT, earning five scholarships and awards during his time at the institute, being chosen as valedictorian for his graduating class, and serving as the BCIT student representative on the BC Aviation Council Communications Committee, he was more than qualified for his new role at North America’s top-ranked airport. He became a BCIT alumnus in February 2019. Later that same year, BCIT awarded him the prestigious Lieutenant Governor’s Award for Trades, recognizing him for his outstanding achievement and leadership as a student.

“Did you know that at any given moment in time, there are one million people in the sky?” he says after being asked why he loves aviation so much. “There is something so romantic and amazing about it…that you’ve got a 175,000-lb plane that can take off just like that.”

Kenneth is proof that you can change your flight path even if you’re an established mid-career professional, and especially if you have discovered what you love.

“My perfect day would include sitting at the end of the runway watching planes all day,” he says. “Now that would be just about as good as it gets.”

3 thoughts on “From politics to planes: How this Airport Operations alumnus changed his flight path mid-career”