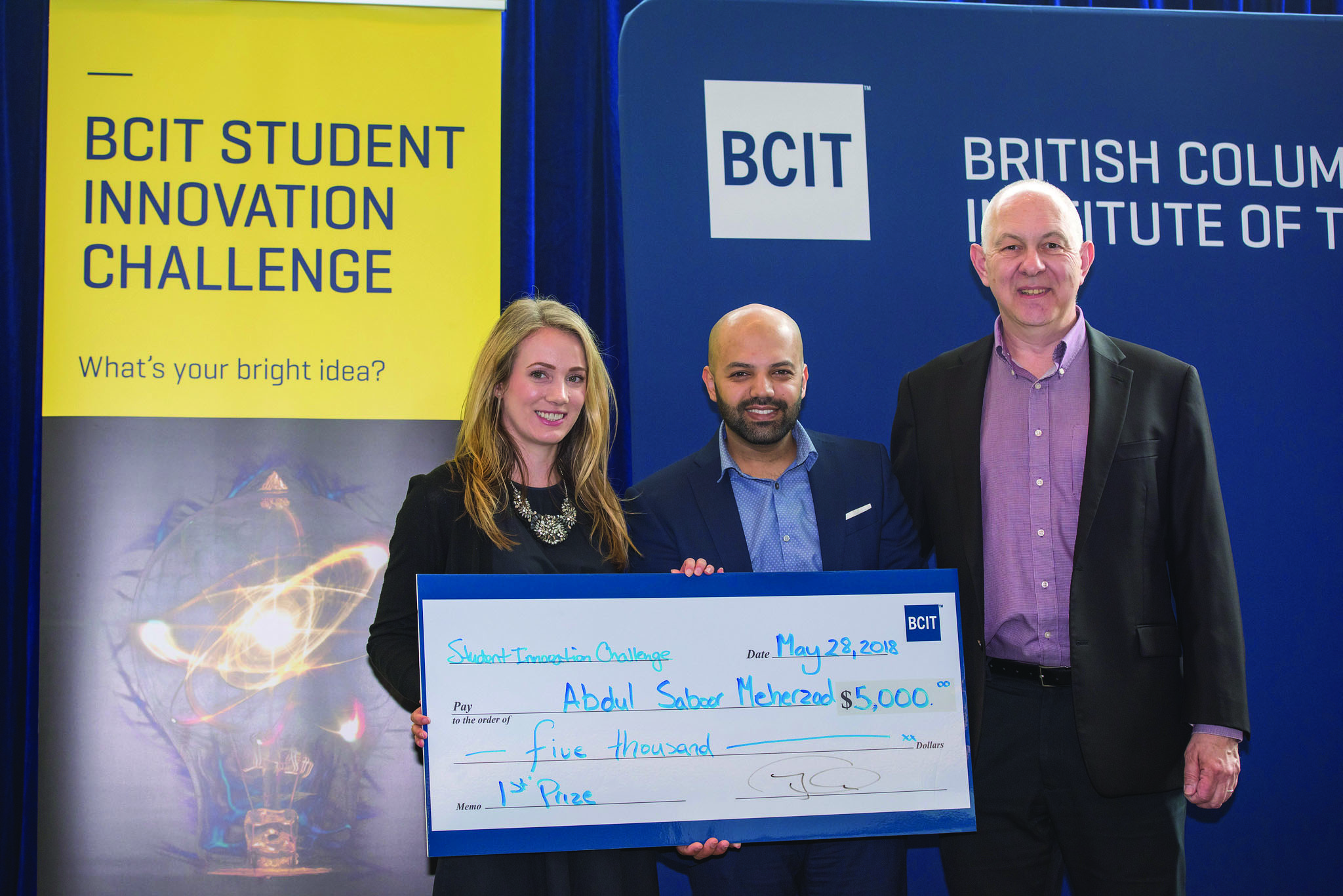 Divine Natural Foods is the brainchild of BCIT’s Saboor Meherzad. His products – nutritional mulberry snacks -– earned him top honours at both the Enactus Club’s Lion’s Lair competition and the BCIT Student Innovation Awards. I met up with Saboor to learn more about his journey from idea to product launch. While waiting for him on the Burnaby Campus, I stopped by the school convenience store and spotted his Divine Natural Bars on the shelf alongside titans of the healthy snack market: Larabar to the left, Sunrype to the right. Suddenly, to my right, Saboor walked in. He had a pleasant smile and gave me a firm handshake. He was more kind than Kind bars, so we sat down together to unwrap his past, and mull over the mulberry snack that turned him into an entrepreneur.

First, maybe you can tell me about your life growing up…
I was born in Afghanistan in 1987, around the Soviet era. I don’t have much memory of my youth, but I do remember the civil war; bombardments, not being able to leave the house, the noise of jets, the dropping of shells. I grew up in that environment, but my parents decided to leave Afghanistan and take us to a safer environment. We migrated to Pakistan in 1994 [and] stayed there until 2000 when we came to Vancouver. Moving away from that, you get a sense of, “Oh, that is not the norm.” You can have peace and live in a safer environment where you don’t have to worry about what’s going to happen tomorrow.

How did you find out about Lion’s Lair?
I started at BCIT in 2011 where I did my Wireless Communications diploma, then I started working at Telus. I came back to BCIT and applied to the Technology Management program. My friend mentioned the Lion’s Lair competition. I talked to one of my marketing instructors in a class which conflicted with the Lion’s Lair program, and she suggested I just drop out of the class and focus on it instead. I took her advice and, with the support of my student mentors, I was able to pitch my idea to the judges and walk away with first prize.

How long did it take you to get from the inception to where the product is now?
It’s been about a year. Last year my brother passed away. The idea [first] came to him when he was in Afghanistan. I always wanted to invite him to live here, but my parents weren’t in a position to sponsor somebody. I always had this thought that: if I had my own company and revenue, I would’ve been able to invite him. After he passed away, one night I saw an episode of Dragon’s Den featuring OMG!’s chocolates. I had seen them here on campus and thought I could come up with a similar product. I didn’t feel comfortable selling another high-sugar product, with chemicals. I didn’t want to create a product or a legacy that was impacting consumers in a negative way. I wanted something positive.

In Afghanistan we have a product with a base of mulberries. They are high in antioxidants, vitamins and minerals. Legend has it, when the Soviets invaded Afghanistan in the late 1970s, the freedom fighters would take the base of the bars with nuts and water. They used to climb the mountains and replenish their energy. They would remain there for weeks and fight the guerilla war, fueled by these bites which helped them to hold out and win the battles. I thought, “Nobody has a similar product in North America or Europe, why not bring it here?”

I talked to my family and I started making it in the kitchen, playing around with the recipe and giving it to friends and family to try. Around September of 2017, I talked to my instructor and mentioned to her that I had an idea. She suggested that for the remainder of the class, I focus my assignments around my idea. I was able to do market research, talk to consumers, speak with retailers. I learned a lot, it was great to be able to go out there and understand what is needed. After, we attended farmer’s markets and craft fairs. We appeared at 5 – 7 events, and over the course of the events we sold over 300 units. In February, we did Lion’s Lair and in May was the BCIT Student Innovation challenge. We went through and were lucky enough to walk away with first prize.

What cost goes into this that people may not expect?
When we first got started we had smaller blenders, but when you are making large quantities, you have to have industrial-grade blenders and food processors to support that. We realized that partnering up with a co-packager that actually has a facility would help a lot.

The packaging and the development are big parts of Divine Natural Bars, but how do you go about getting your product carried in a particular store?
Reaching out to them and getting to the decision-maker. We’ve been pushing hard on social media and ensuring that we’re actively engaged. Through Instagram, an online natural food and supplement store has shown interest in carrying our product. Our goal was to be carried across Canada by the end of 2019; I think that this partnership will achieve that goal much sooner. We’re out west and if we build a partnership in the east, customers can go onto their platform and order there. They can have them delivered to their residence in a matter of days, if not hours.

I believe we are facing a bit of a public health crisis right now. Our lives are more sedentary than ever and our diet is poorer. How would you say your business aims to address this issue?
A majority of the problem is refined sugar. CBC had a video showing a direct relationship between the rise in refined sugar consumption and obesity, diabetes, and heart disease. We find sugar in other products that we might not notice unless we check the contents of our food. Our goal is to keep the product as natural as we can. The only things that go into making the bars are dried mulberries, nuts and seeds. For a whole package, our bites have only two grams of natural sugar and the sweetness comes from the berries.

I understand that your family was instrumental in inspiring and developing the product because your father has diabetes. These bars are perfectly fine for him to eat?
Yes! He has a sweet tooth and the doctors tell him to avoid sweets. I suggested he have my bars instead [because] you can get your sugar craving without having that adverse effect. It’s been scientifically proven that mulberries help lower blood sugar. For people with diabetes, it’s perfect.

Does he have a favourite flavour?
He likes all the flavours we make. We have the original, chocolate, matcha and coconut, and he likes them all. It’s perfect that he gets to try all of them. So, if he has a chocolate craving, he can have it. We use pure dark chocolate liquor, you can get your chocolate craving without getting a big dose of caffeine or refined sugar.

Do you have anything in the works that you want our readers to know about?
By February 2019, I will apply for Dragon’s Den again. We went last year, but we were small and weren’t in any stores. We were selling online and we hadn’t rebranded. We’ve learned from that experience. It allowed us to be in front of the producers and taught me that if I were to go to another competition, or Dragon’s Den again, I’d know what to expect. Then we can wow the producers or the judges. It’s a learning opportunity.

How important would you say it is for students to know about the opportunities around them while they are learning?
I wasn’t aware of Enactus’ Lion’s Lair competition at all. There might be other students in my position who don’t know about it at all. The Student Association’s Entrepreneurial Services also hosts workshops, brings in speakers, but I think a lot of people might not be aware of it. There’s no cost associated with it and there are a lot of services the SA provides; such as building a resume, doing mock interviews or building cover letters. Students should take advantage of that service.