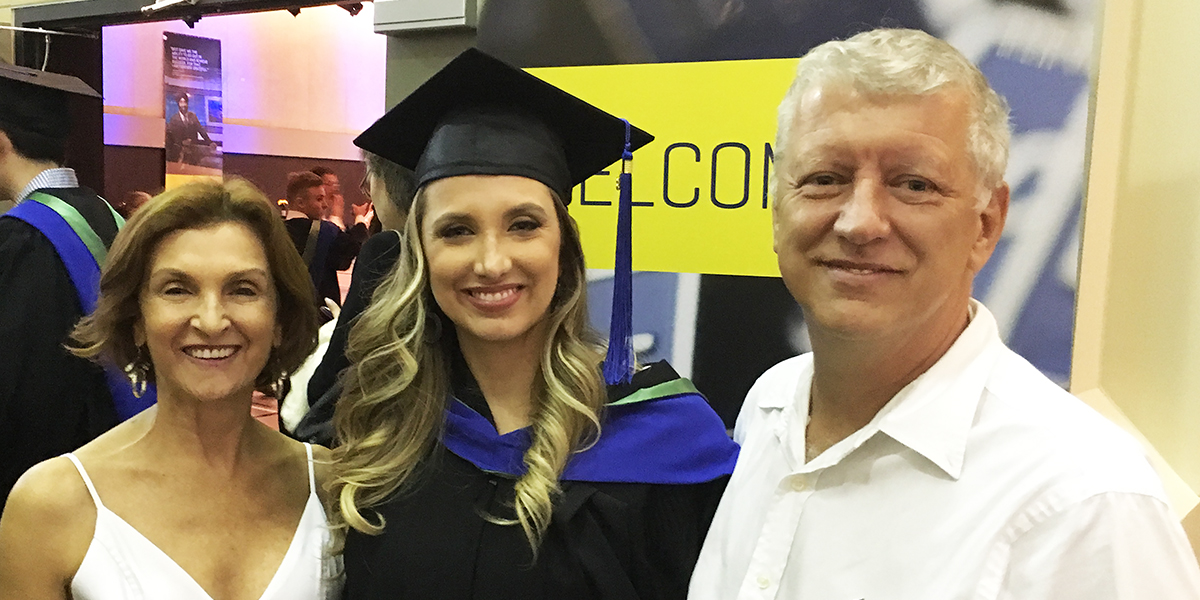 11,219 kilometres, two proud parents, and one high-achieving BCIT grad. That’s the trifecta that made June 21, 2018 a very special day for the Simões family. It was Mariana Simões’ graduation day from BCIT’s Business Management diploma program, and her parents had travelled from Rio de Janeiro to see their daughter officially become a BCIT alumna.

Two years ago, Mariana, who had lived in Brazil all her life, decided to move to Canada and study business at BCIT.

“I did a lot of online research and found that BCIT received a lot of really positive reviews,” says Mariana, who had already earned a business degree in Brazil. “I chose to get the Business Management diploma because I wanted to understand how business works here. I wanted to live and work here and felt it’s really important.”

While Mariana was confident she was making the right decision, she was still nervous about leaving her family, friends, and home to study in new country.

“I was scared because English is not my first language, and now I had to not just speak English but also study and learn in English,” she says. “I also didn’t know much about Canada. I tried to learn as much as possible by watching YouTube videos of other Brazilians who had moved here.”

When she arrived in Vancouver with her husband (they married just one month before moving to Canada), Mariana says her new classmates in the Business Management program made her adjustment to life on the West Coast much easier. Her fellow students—many of them also recent transplants from Brazil—became her family here.

“Studying at BCIT is challenging because there is a lot of work,” she recalls. “But [my classmates and I] helped each other because we were a close group of friends.”

Among friends and classmates, this kind of caring is to be expected. What Mariana didn’t expect was a similar kind of caring from her BCIT instructors.

“In Brazil, you are the student and your instructors are your instructors—you don’t interact,” she explains. “At BCIT, I was really surprised that the instructors really care about you, what you’re learning, and how you will use it. They see your potential and your effort and they just want to help you.”

Mariana’s hard work at BCIT did not go unrewarded. In October 2017, she was presented with the BCIT Alumni Association Award, which is given to students based on academic standing and involvement in school or community activities.

Now a BCIT graduate, Mariana is excited about the future. While she misses the warm weather and postcard-perfect beaches of Brazil, she says she looks very forward to building a life and career in Vancouver.

Congratulations, Mariana and all BCIT’s newest graduates! You join the ranks of more than 180,000 proud alumni here and around the globe.