When you look back on your life, can you identify someone who positively influenced your career path? Someone who was instrumental in helping you succeed? If you can, count yourself lucky. Mentorship can be a powerful catalyst for someone who is just starting his/her career. Just ask BCIT alumni Dominique Kwong and Yasamin Alami. They attribute much of their career success to having been mentored themselves. Now, they’re paying it forward by as mentors to current BCIT students through the BCIT Student Association Mentorship Program. 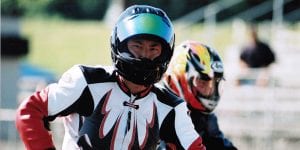 Dominque Kwong, graduate of BCIT’s Electrical and Computer Engineering Technology diploma program, says his mentor helped him correct his course when he needed it.

“My first boss hired me on contract during the economic downturn when I graduated from BCIT,” he recalls. “He was not officially my mentor, but I treated him like one and he treated me like his mentee. I remember he made me feel like we were on equal footing even though he was up there and I was down here. He had the ability to draw out the best in me but he also told me when I wasn’t living up to my potential.”

Dominque’s experience being unofficially mentored by his first boss made a big impact. He says it taught him to strive to do his best. Dominique has come a long way since that first contract job. Today, he is co-founder of Damon X Labs, a motorcycle company that has developed a proprietary 360-degree awareness system that allows riders to ‘see’ threats of which they may not be aware. It collects data from the rider, the motorcycle and the environment to model the rider’s behaviours to keep him/her safer.

Just as the motorcycle awareness system helps riders, mentors can help mentees see their surroundings more clearly and adjust to the conditions along their career journey.

“There are so many people out there who can mentor a student who needs a little guidance,” Dominique says. “Think about all the insecurities you had were you starting your career. What if you had someone who could help you get to where you want to go, step by step? You can be that safety net for someone and be a part of their journey to success.”

Being a mentor isn’t just about giving, though. According to Dominique, the small investment he’s made as a mentor gives him rewards too. “It gives me immense joy,” he says. “I have been so lucky to have amassed this knowledge and experience from the mentors I’ve had in my life. I feel good being able to share that with students who are starting out.” He adds that, through the mentorship process, mentors may even find their next hire.

Yasamin Alami: A view of the possibilities 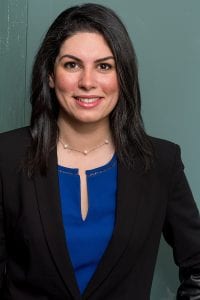 “She taught me so much,” says Yasamin Alami, BCIT Financial Management diploma and Bachelor Accounting grad, about her mentor, a former dean at BCIT. “She showed me that while what I was doing was good, with a little leap, I could move from good to great. She really expanded my view of what things could be for me.”

It wasn’t quite what she expected when, as a student, she’d signed up for a mentor. “I thought someone would just dump all their knowledge on me and that would decide my future,” Yasamin laughs.

Yasamin, who is now a senior accountant with Smythe CPA, was matched with her mentor through the BCIT Student Association’s Peak Leadership program (which is funded by a BCIT Foundation endowment).

“I always thought of leadership as this big thing, but I realized through the Peak Leadership program and my mentor, you can be a leader right in your community doing small things,” Yasamin says. “So, I decided to lead by volunteering at BCIT with the Financial Management Association, and subsequently with BCIT’s Student Association.”

Yasamin was so happy with her experience with Peak Leadership and everything it taught her that, the following year, she signed on to be a mentor herself.

An avid hiker, Yasamin says she knew she wanted to be a mentor after hearing Robert Murray  speak at a Peak Leadership event. “He was talking about his experience hiking Mount Kilimanjaro and how, as a leader, you have to show leadership, ensure everyone is working as a team and see that everyone is doing okay because you’ve still got to keep your eye on this big mountain you have to climb.”

For many students who have busy daily lives, achieving their career goals can be as daunting as climbing a mountain. They barely have time to juggle competing school deadlines and heavy workloads, let alone worry about their bigger career picture. Yasamin says she loves helping students keep their perspective amidst the busyness.

“Sometimes you just need a different way of looking at things,” explains Yasamin. “Take a step back, do things one step at a time and suddenly things aren’t as overwhelming as you first thought. You may be going uphill and wonder, ‘why am I doing this to myself?’ Because when you get to the top, the pay-off is the beautiful view.”

Interested in helping current BCIT students on their career paths? Consider becoming a mentor for September 2018. Deadline for submissions is July 5, 2018, intake interviews (via phone or virtually) to take place by July 20, 2018. Read more about BCIT Student Association’s Mentorship Program.