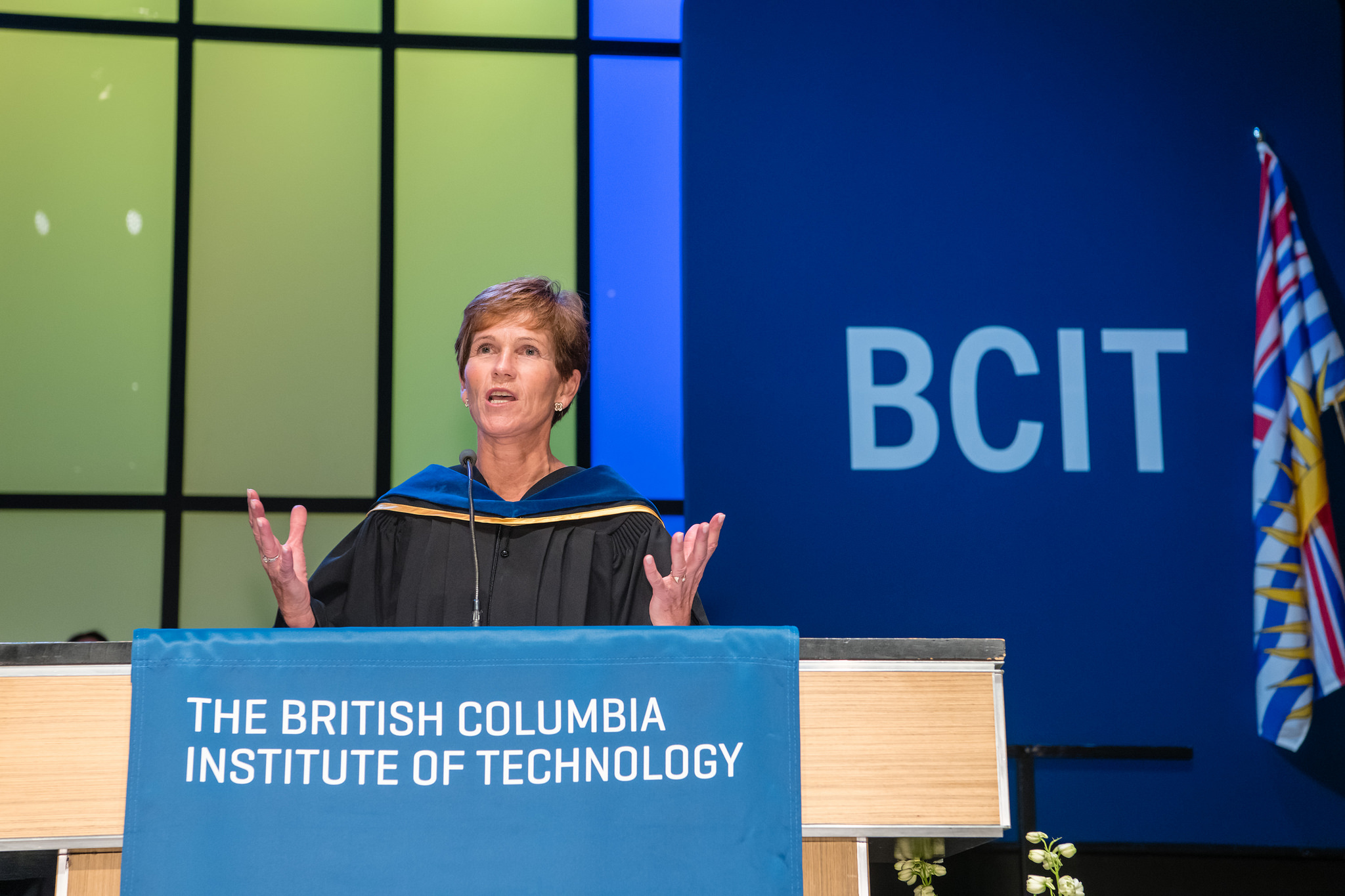 CEO of Canada’s Digital Technology Supercluster Sue Paish told graduating students that the learning environment they have been part of at BCIT has prepared them well for the demands of the rapidly evolving Canadian economy.

Paish was one of two business leaders chosen this year to receive honorary Doctorates of Technology from the British Columbia Institute of Technology – two well-accomplished leaders who couldn’t have more different backgrounds or life experiences. But both Paish and indigenous business executive David Tuccaro had advice in their keynote speeches that were equally valuable to the hundreds of BCIT students attending their convocation ceremonies on June 20 and 22, respectively, at the Willingdon Conference Centre.

Paish started her career as a lawyer and went on to make a significant mark as a managing partner at one of Canada’s most respected law firms, Faskin Martineau. She later became CEO of Pharmasave Drugs and then at Lifelabs. Most recently she was appointed CEO of Canada’s Digital Technology Supercluster, a new agency which is dedicated to making B.C. and Canada a global leader in digital technology.

She’s earned numerous honours including Queen’s Counsel, as one of B.C.’s Most Influential Women in Business and was an inductee into Canada’s Most Powerful Women: Top 100 Hall of Fame.

BCIT is very distinctive globally, for “a number of things in its own DNA” that it passes on to its students: how to multi-task, to be outcome-oriented rather than process-oriented and to be resilient, she said.

“When you’re a student and you’re balancing multiple research assignments, two midterms and four labs, you’re actually learning how to multi-task and how to be focused.  Those are critical characteristics that you learn from the environment. You don’t learn this in the classroom. And that’s the kind of environment that BCIT has.”

A long-time advocate through the BCIT Foundation board, she says the institute develops another important trait in its students: collaboration among multiple groups including their colleagues in the classroom, a trait that will become more and more important as Canada leads the way in digital technology.

“Those colleagues in the classroom are not your competitors for the top spot on the exam; those colleagues are your future teammates in whatever organization you are going to be in.

You have to be curious. And you have to be prepared to embrace perspectives that are different from your own.”

Tuccaro grew up in Fort Chipewan, where the school only had up to Grade 9. He finished high school in 1976 in Fort Smith, Northwest Territories, and entered an automotive apprenticeship program. He trained as crane operator, and then went on to study business management.

Today, he is president, CEO and founder of Tuccaro Inc., a group of companies ranging from mining and oil field equipment supply to a geoscience and environmental laboratory. Along the way he has received numerous honours, the National Aboriginal Achievement Award in business and commerce and Venture Magazine’s honor as one of Alberta’s 50 Most Influential People.

But some of Tuccaro’s best life lessons started with his father—at minus 40 degrees setting traps for fur bearing animals like beaver, bobcats, lynx and muskrats in the wilds of northern Alberta. He learned to be prepared because your life depends on it.

BCIT does a good job of preparing its students, he said. “They focus on the areas of demand so that students can take advantage of full-time positions in specialized areas in the economy. At BCIT, you can take that diploma anywhere in the world.”

During his convocation speech, Tuccaro warned the graduating students to be prepared for life’s ups and downs. He noted his group of nine companies has employed as many as 680 people but following the devastating 2016 Fort McMurray fire, his workforce has dropped to 230 people.

“It is starting to grow back up again but that is what these students are going to be challenged with once you leave here.”

He urged students to look to their families for the help they will need through their lives. “You’re going to come across a lot of problems for sure but always know that the family are going to look after you and be with you and support you the most.”

He also advised them to remember that their word is their bond.