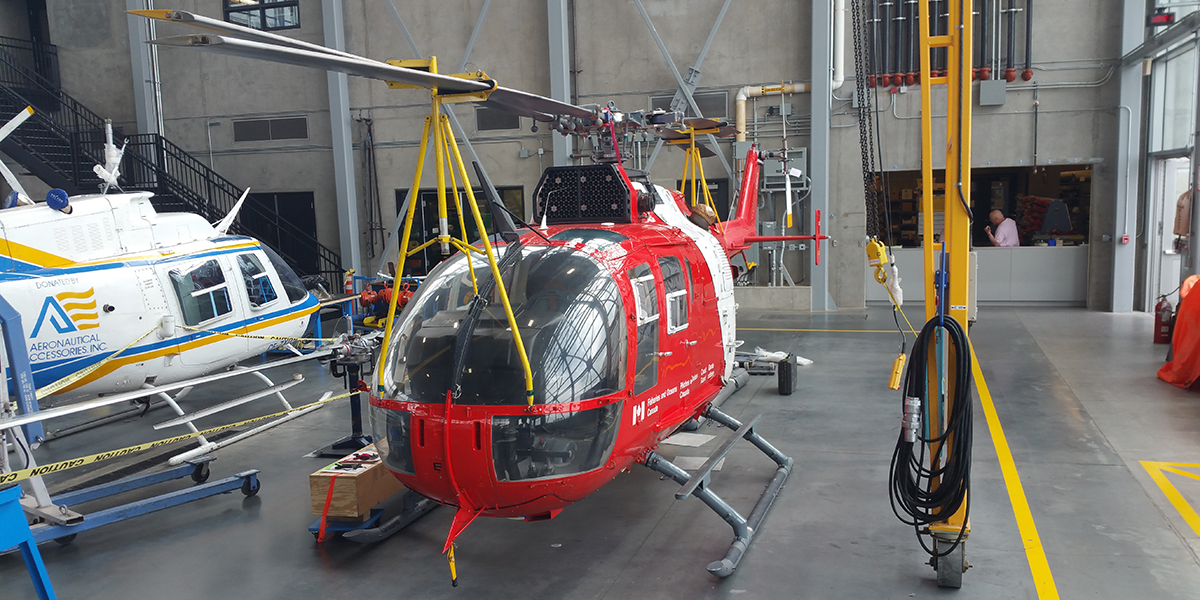 A new arrival at BCIT’s Aerospace Technology Campus (ATC) has students’ excitement flying high. Thanks to the Canadian Coast Guard and Steve Mullis, BCIT Aerospace instructor, students now have a Messerschmitt-Bölkow-Blohm (MBB) 105 helicopter—valued at approximately $165,000—to enhance their training and give them invaluable hands-on experience.

“The exciting part about this aircraft is that it comes to us completely intact and operational, giving our students a realistic experience,” explains Steve Mullis, instructor at BCIT’s ATC. “They aren’t just working on another training aid or mock-up.”

When the Canadian Coast Guard announced last year that it wanted to donate a surplus of Messerschmitt-Bölkow-Blohm 105 helicopters to training schools across the country, Steve quickly initiated a request to acquire one. With the support from BCIT Foundation, the aircraft was approved and delivered to ATC earlier this year.

“We are so thankful to the Canadian Coast Guard for this extraordinary donation,” says Jackie Jacob, executive director of BCIT Foundation. “This aircraft emphasizes BCIT’s commitment and reputation for providing our students access to real-world, hands-on experience that sets them apart around the world.”

The Messerschmitt-Bölkow-Blohm (MBB) 105 is a light, twin-engine multi-purpose helicopter originally developed in Germany. The aircraft is known for its ability to perform stunts including dives, rolls, loops and other aerobatic maneuvers. One of the aircraft’s most significant features is its ridged rotor system, which, before this donation, BCIT did not have an example of in its hangar.

“This helicopter has the potential to be used in all three of our technical programs: Aircraft Maintenance Engineer Category M, Aviation Maintenance Technician – Avionics and Aircraft Gas Turbine Technician,” says Steve.

Students can look forward to the helicopter being incorporated into the curriculum as a tool on which they will learn to conduct inspections for airworthiness, adjust flight controls and perform function checks on navigation and communications systems. In the future, Steve says the Aerospace program plans to have students involved in performing ground runs and maintenance checks on this state-of-the-art aircraft.

Learn more about BCIT’s School of Transportation and Aerospace programs.