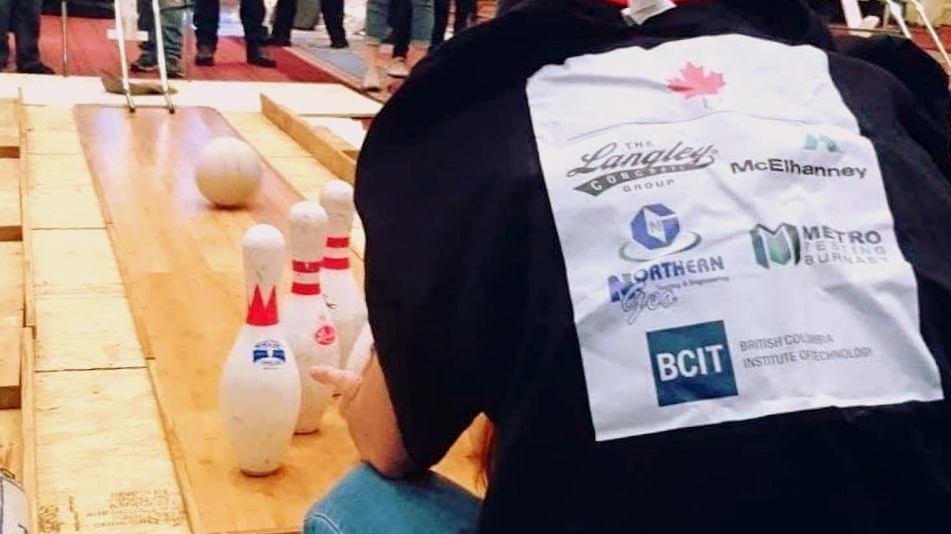 For the past seven months, the BCIT ACI Student Chapter has been working hard to prepare for the biennial 2018 ACI Student FRC Bowling Ball Competition held in Salt Lake City, Utah. The competition was designed to demonstrate the effect of fibres reinforcing concrete, to gain experience in forming and fabricating a fibre-reinforced concrete element, and to encourage creativity in engineering. It has two categories for prizes: design and analysis. After a whirlwind weekend, the team learned that they had earned podium finishes in both categories: first place in design, and third in analysis!

Facing Challenges as a Team

The first category,  Design, tested the team’s ability to accurately predict test outcomes for their bowling ball submissions. The team with the least difference between their predicted values and the actual results won that category. In this part of the competition, BCIT won first place by a huge margin, leading ahead of other top three teams by 36 points. The second category was Analysis, in which the results of each test would be compared to other teams and the winner selected based on best overall outcomes. It was a close competition between the top three teams, with each team placing 5 points from each other.

The co-presidents of the BCIT ACI Student Chapter, Josh Saffold and Michelle Chung, highlighted three major challenges their team had to overcome during the planning phase. The bowling balls needed to be lightweight, yet still be able to support a high load. The team experimented with different aggregates, such as styrofoam beads, perlite, and even rice.

The other issue was getting the mixture fractions just right to make the strongest ball. There are risks associated with air pockets or the concrete separating from the aggregates as the ball dries, which would compromise the ball’s load strength. The team spent some time designing a mold for the bowling ball using 3D computer modelling. Design considerations required creating a flawlessly spherical form, which is a feat of its own!

To qualify for scoring, adherence to minimum design specifications was very important. However, integrating knowledge from the Civil Engineering program alone was not going to cut it in this international competition. On top of that, the team had to devise innovative solutions to be a competitive force in the two categories.

A Force to be Reckoned With

This is the first time BCIT competed in the ACI Competition and achieved recognition in the top three teams for two categories. In the past, BCIT has placed second in the 2010 Performance Category and third in the 2008 Prediction Category.

The team was up against approximately 60 teams of contending civil engineering students. Even more impressive was that all the students who participated from BCIT were first and second year students. They placed better than more-senior teams comprised of third and fourth year students!

Michelle Chung recognized the adversity her team might have faced at the competition. The BCIT engineering team was the only team at the competition with a female majority, comprised of six women and two men. The challenges the team faced only brought them closer together, and Michelle played a huge part in keeping morale high. She has shown the world that women in engineering can do better than beat the odds as a minority group: they can successfully lead their teams to victory!

“Women are a minority in engineering, especially in international competitions,” said Michelle Chung, Co-president of BCIT ACI Student Chapter. “The team had to keep it together and prove that not only can women be a part in engineering, but can also win, as Canadians!”

“It is not very common for a team to place… in BOTH categories, especially when up against some of the best teams in North and South America. It is certainly a first for our department, and something our students can be proud of,” said Sudip Talukdar, Team Faculty Advisor and Civil Engineering Instructor.

Congratulations to all involved. Once again, this competition has shown the world what our Civil Engineering students are capable of and their potential for future successes. BCIT is definitely a force to be reckoned with in the sphere of engineering; learn more about the Civil Engineering program today!