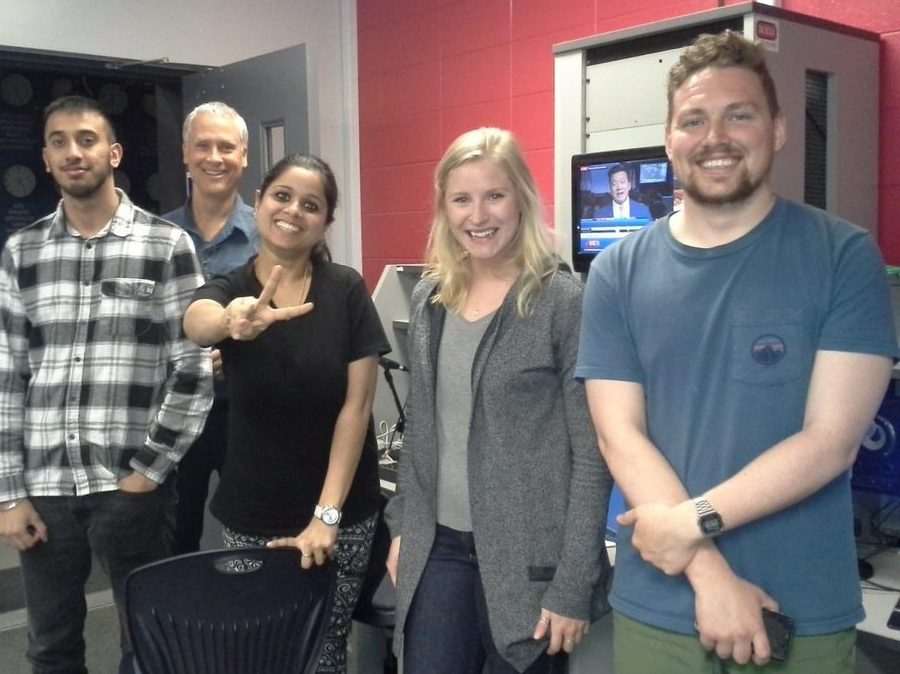 May 9th’s provincial election was a historic night for voters and a unique experience for first-year BCIT Journalism students.

Throughout the night, BCIT News crews pumped out eighteen live hits on Facebook Live, scores of tweets, plus live hits and reports on seven radio newscasts for our own Evolution 107.9.  As well, three TV stories were filed for the week’s BCIT Magazine show.

One of the student reporters in the midst of the media fray, Cheyenne Bergenhenegouwen, said, “It was exciting to experience the fluctuating emotion in the air and to meet all the different people. The energy and thrill of reporting on such an event is amazing.”

“Being around that sort of energy was inspiring!  You could sense at the Liberal Headquarters downtown that people were anxious. Trying to document these emotions as best I could was a challenge but also a learning experience.”- Haider Nayani, Broadcast and Online Journalism Student

Mack Britton and Spencer Harwood led the coverage from the NDP Headquarters, on what ended up being a long, but educational night.

“It was a good experience to be part of the media for such a widely covered story. The experience was definitely what I would expect from a job in the field after graduation.”- Mack Britton, Broadcast and Online Journalism Student

The response on the BCIT News Facebook page was impressive. More than seven hundred video views – one video hit the timelines of fourteen hundred Facebook users.  The total reach of the page for the night topped twenty-five hundred.

Overseeing the student journalists were BCIT instructors Julia Foy and Alan Waterman, both veteran reporters with 39 provincial and federal elections between them.

“It was exciting to see how engaged our students became as election day turned into night, and the race turned into a real nail biter! We had a team of news chasers providing up to the minute news and live interviews on 3 platforms – Evolution 107.9 Radio, BCIT News Online and BCIT News Facebook Live – a first for our broadcast and online department. Some students stayed well past their scheduled shift so they could be a part of this history-making event. I’m very proud to have had the opportunity to see our students soar!”- Julia Foy, Broadcast and Online Journalism Instructor

For Waterman, it was a thrill to watch the budding journalists come alive in the mayhem of a quickly shifting political story.

“They went from anxiously anticipating their assignments during the first team meeting to clamouring to report the latest development from the field, preferably live on Facebook Live or Evolution Radio.  Reporters were originally scheduled to file a total of five video reports.  They finished the night with more than three times that number.  They were totally professional, and the working professionals rubbing shoulders with them recognized it.” – Alan Waterman, Broadcast and Online Journalism Instructor