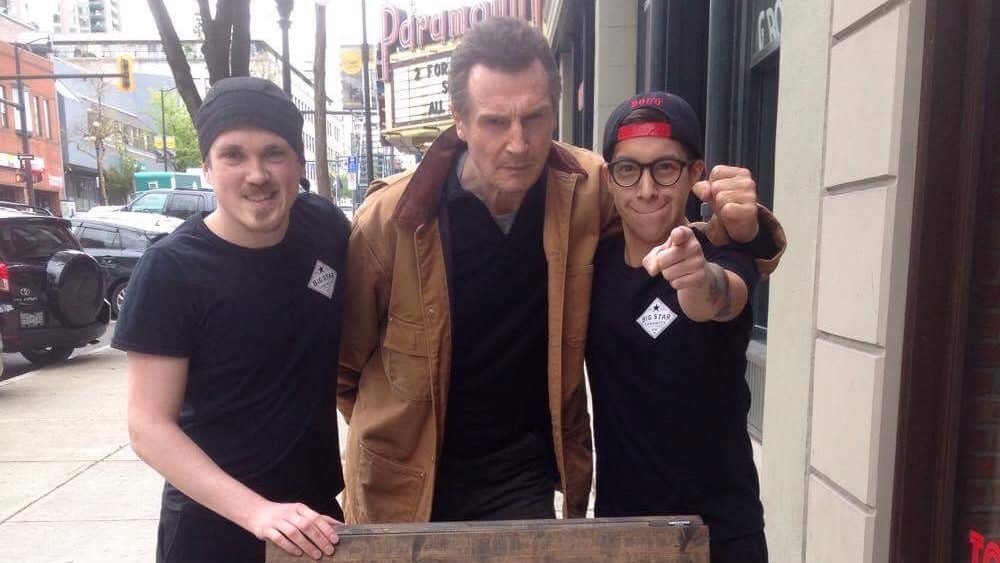 You probably saw that shot of Liam Neeson with the sandwich board. It was a viral photo of the actor checking in on the board’s stated promise—that he could eat at the New Westminster sandwich shop for free. The story got national coverage, including The Globe & Mail and HuffPost.

BCIT Music Business alumnus Alex Johrden is the Director of Operations for Big Star Sandwich Licensing Ltd. We caught up with him to find out what it’s like to get caught up in a viral story.

1. What did you expect would happen with the sign?

We thought people would chuckle and a we might lure a few more customers in for lunch.

Liam Neeson walked into the shop! Doug was busy making sandwiches, and heard Serge say, “Holy [expletive]!” Doug turned to tell Serge off, but stopped in his tracks when he saw Liam Neeson had actually walked in! Liam said, “Where’s my free sandwich?” in his intimidating Taken voice, and offered to take a picture with the guys and the sign. As you can see in the photo, Doug and Serge were starstruck. Unfortunately, Liam didn’t actually have time to eat and rushed back to set.

As soon as they sent me the photo I put it out on Big Star Sandwich Co.’s social media accounts. The next morning I woke up to a couple media enquires and it just kinda grew from there.

3. What was it like to be a part of a viral story?

Stressful, but really neat. Suddenly I was the spokesman for our brand on the world’s biggest media outlets. Immediately after our posts starting gaining traction I set up interviews for the boys with CBC, CTV, and Global. I was also fielding calls from major news networks, going on air for radio stations, the whole nine yards. I found it really cool to watch this small thing we did for a quick laugh spread across the world.

4. How has this affected business?

Sales have been amazing. We saw an immediate jump at both our locations as soon as the story broke. The New West shop had they best day ever as a result of it.

Now we’ve name a feature sandwich “The Neeson.” It’s got lot’s of beef, a one-two-punch of bacon and hickory sticks, and spice that’ll get revenge on you tomorrow.

5. How did BCIT prepare you for all of this?

Instructor Chris Brandt’s Music Business program at BCIT gave me the skills I needed to manage the whole thing, especially media training and social media marketing. I feel like I was able to keep the story straight and ensure information about Big Star Sandwich Co. stayed attached. If I hadn’t been in the program I would’ve been overwhelmed immediately and I’m pretty sure the media would have left our branding out all together. You can’t buy this kind of publicity, so It would have been a shame if we couldn’t capitalize on it.

I’m very happy to have been able to take the skills I use to manage my band, Chase Your Words and apply them to a career outside my field of study.

6. So you’re a musician as well as a social media hit?

I drum in Chase Your Words, a Vancouver based pop punk band. We recently signed to Kellin Quinn’s (of Sleeping With Sirens) newly-minted record label and released our second EP “Here To Stay.” You can catch us this summer at Electric Love Music Festival in Agassiz, July 28-31.

I took the BCIT Music Business program to gain the skills and knowledge it takes to have a fighting chance in today’s music industry.

7. What has the past week been like for you?

Amazing. I’ve made a ton of new connections for the business and my personal network. Our brand recognition is through the roof, and the story has been a real source of pride for our staff, customers, and the community.