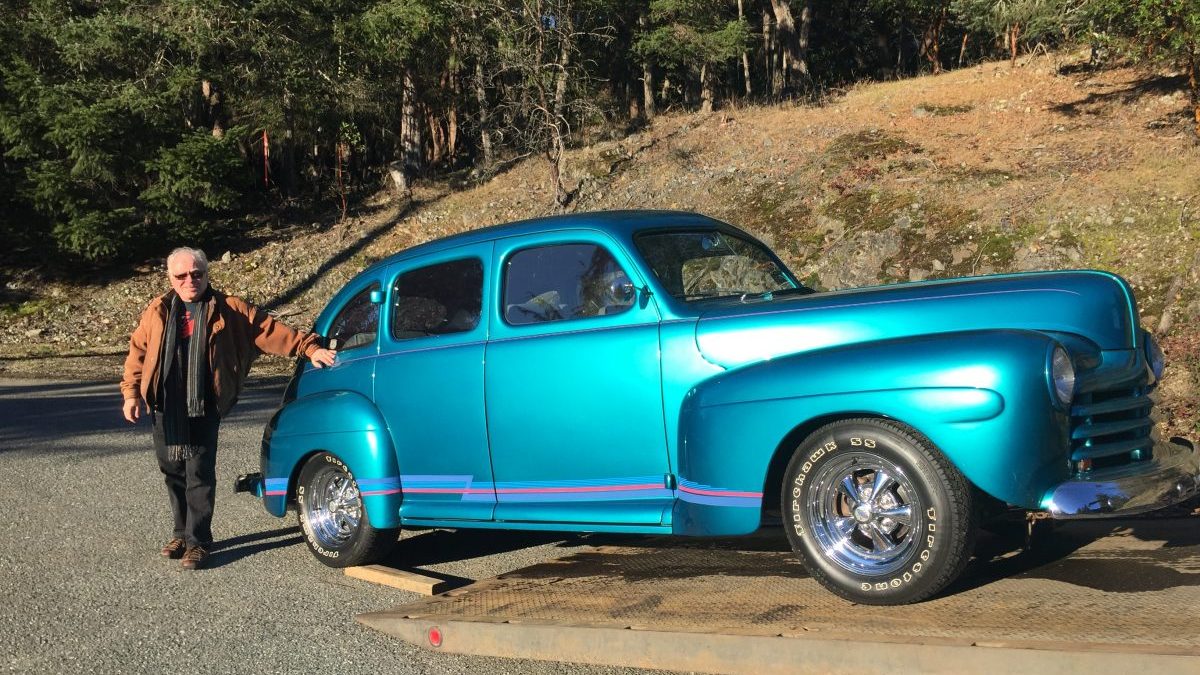 Whether it is a trip around the world, skydiving, or seeing the Mona Lisa, bucket-lists all have one thing in common: each is important to the person who wrote it. That’s why when John Leech, longtime BCIT-supporter and alumnus, decided to donate his ‘bucket-list’ hot rod to BCIT we were shocked and left wanting to know more.

John bought himself the 1946 Ford to mark a special brithday. His love of old cars runs deep and this one happened to be in the right place at the right time. The car, that John refers to as The ‘46, is really only a ’46 Ford on the outside. Under the hood it has the workings of a Chevy Chassis with a 350 Vet engine.

John has spent many a weekend with The ’46 cruising between Qualicum Beach and Nanaimo on Vancouver Island with the sounds of classic rock n’ roll blasting through the speakers.

Some car enthusiasts would be chomping at the bit to show this car off at rallies or car shows, but not John. “It was for family enjoyment, and enjoyed it was—especially by the grandkids,” he explains.

After six years of good times with the family, John has decided it is time to pass the hot rod along, and help his alma mater out along the way. He approached the BCIT Foundation and offered to hand over the keys.

The Foundation was thrilled: this car opened a door to a whole new way to give. Nobody had ever donated a car in this way. We reached out to ADESA auctions and asked if they could help us sell a car in name of a charity. It turns out, that’s something ADESA has a lot of experience in. John was thrilled that his bucket-list item could help more students attend BCIT and the program that he accredits much of his professional success to.

John has supported BCIT personally and through his position at ASTTBC for a number of years. The applied nature of BCIT’s programs are what has lead John to hire, and recognize through membership, many graduates. As he said, BCIT grads have always been job-ready and in-demand, “in the 60’s, today, and into the future.”

We could not have said it better ourselves!

The ’46 will be officially auctioned off on January 28th at 10am at ADESA Richmond Public Auction with all proceeds going to BCIT students.

When asked who he hopes ends up with the car, John said “[I hope the car] ends up in the hands of an enthusiast who will have great fun before passing it along.”

Because of Johns’ generous and personal donation more future students can check getting an education off their bucket-list!

Mr. Leech is the CEO of Applied Science Technologists and Technicians of BC (ASTTBC), a regulatory body for engineering and applied science technology professionals in the province of British Columbia. He accredits part of the success of his career to his BCIT education.

John Leech has deep roots within the BCIT community. While at BCIT he was an active student leader and earned the BCIT Student Association Citizenship of the Year Award. He graduated with two Diplomas from BCIT’s Geomatics program in 1970 and 1971. Since then, Mr. Leech has sat on the BCIT Board of Governors (1985-1988) and served two terms as the BCIT Alumni Association Board of Directors President (1985-1987). Throughout his career with ASTTBC he has supported BCIT on many fronts including serving as Co-Chair of the BCIT 20th Anniversary celebrations, and supported fundraising at the Institute. In 2008, he was awarded the BCIT Distinguished Alumni Award for Lifetime Achievement.