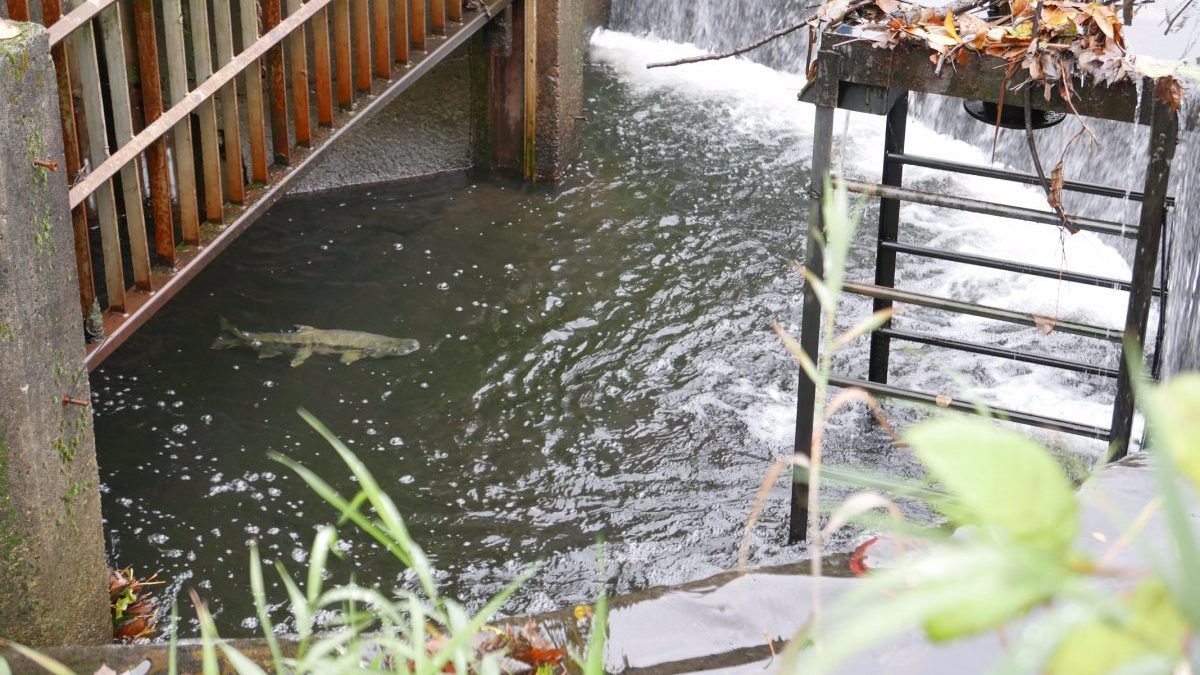 It’s exciting times at the Burnaby Campus of BCIT. Adult chum salmon are returning to spawn in Guichon Creek. After two or three years in the ocean, having traveled half-way to Japan, they are coming home.

We asked Rivers Institute Chair, Dr. Ken Ashley, why this event is important.

Why is it exciting?

Everyone likes salmon, and after years of no salmon in these creeks and rivers, it is great to see them back again—this gives people hope that the investments in access and water quality improvement have resulted in positive changes in their local environment.

Why does it matter that the Chum have returned to the edge of Campus?

It’s important for a variety for reasons, the main one being that it shows the access for salmon to Guichon Creek has been greatly improved in the past few years, due to a fish way being built at the Cariboo Dam on the Brunette River, and improvements in access under the highway at the Willingdon exchange on Hwy 1. Plus, everyone loves seeing salmon in streams – it is part of BC’s natural history.

How long will the spawning go on for?

The salmon will continue to arrive, likely peaking in the next week or so [early November], and most will have spawned and then died by mid-November.

Where is the best place to go look?

The nearest local place to look is in Guichon Creek beside the TELUS building across from Canada Way, and Still Creek behind Canadian Tire near Rupert St.

Why are salmon so cool (in this context)?

Everyone has their own answer to this question.  The usual answer is that they migrate such long distances (1000’s of km), yet return to spawn within a few meters of where they were born.

The return of the salmon is not something to take for granted. The restoration of Guichon Creek has been a decades-long project. As BCIT Rivers Institute Chair Emeritus Mark Angelo recently explained, “BCIT is probably the classic example in the entire country, of a campus that has a fish-bearing stream of both trout and salmon, that has been restored from a totally dead stream to now a very vibrant waterway.”

The project is not complete. The next phase will be the day-lighting of a 700m stretch of the creek that runs under campus.

“The day-lighting is the critical step in restoring Guichon Creek, as it will allow salmon access to the BCIT campus for the first time in about 50 years,” says Ken. ”

“We hope the day-lighting will initiate a long term program … so that all sections [of Guichon] become functional stream habitat with salmon returning to spawn each fall, and cutthroat trout living in the creek year round.”

It’s an ambitious plan, but one that makes sense when you go see these Chum fight their way closer to campus.

Ken led about 20 BCIT staff to see the first chum return on Friday, October 28. The staff members cheered a salmon as she made her way into a tunnel that runs under Willingdon Green.

Mark Angelo happened upon the group as he tried to spot the fish for himself. He’d heard about the return from a former student. He was in Whistler at the time, so he jumped in his car and came back to Burnaby.

“Once I got to the creek, it was certainly exciting to see the fish but shortly after I arrived, it was also wonderful to see 20 BCIT staff members coming out to take a look as well,” he says. “They were all so excited to see the salmon and keen to learn more about them. Many were literally rooting for the salmon as they swam upstream, which I thought was so neat.”

As Chair Emeritus of the Rivers Institute, Mark has been a strong advocate for day-lighting the creek.

“Looking to the future, I believe we’ll have salmon like the ones we saw today spawning right on campus, which would be a wonderful thing to see for students and staff – and it would be incredibly positive for BCIT as a whole. That is something we use to dream of long ago as we started efforts to reclaim the creek but, after seeing those fish today so close to campus, you know that dream can and will become a reality in the not too distant future. ”

UPDATE: On Monday, November 7th, a few chum reached the culvert outside the gym. A male and a female were helped over the culvert into the upper part of Guichon Creek. Nice work, salmon (and advocates)!

NB: Please stay on marked paths and do not wade into the creek. Please also ensure dogs leave the salmon undisturbed. Thank you.

2 thoughts on “Grab a chum and check out the salmon”