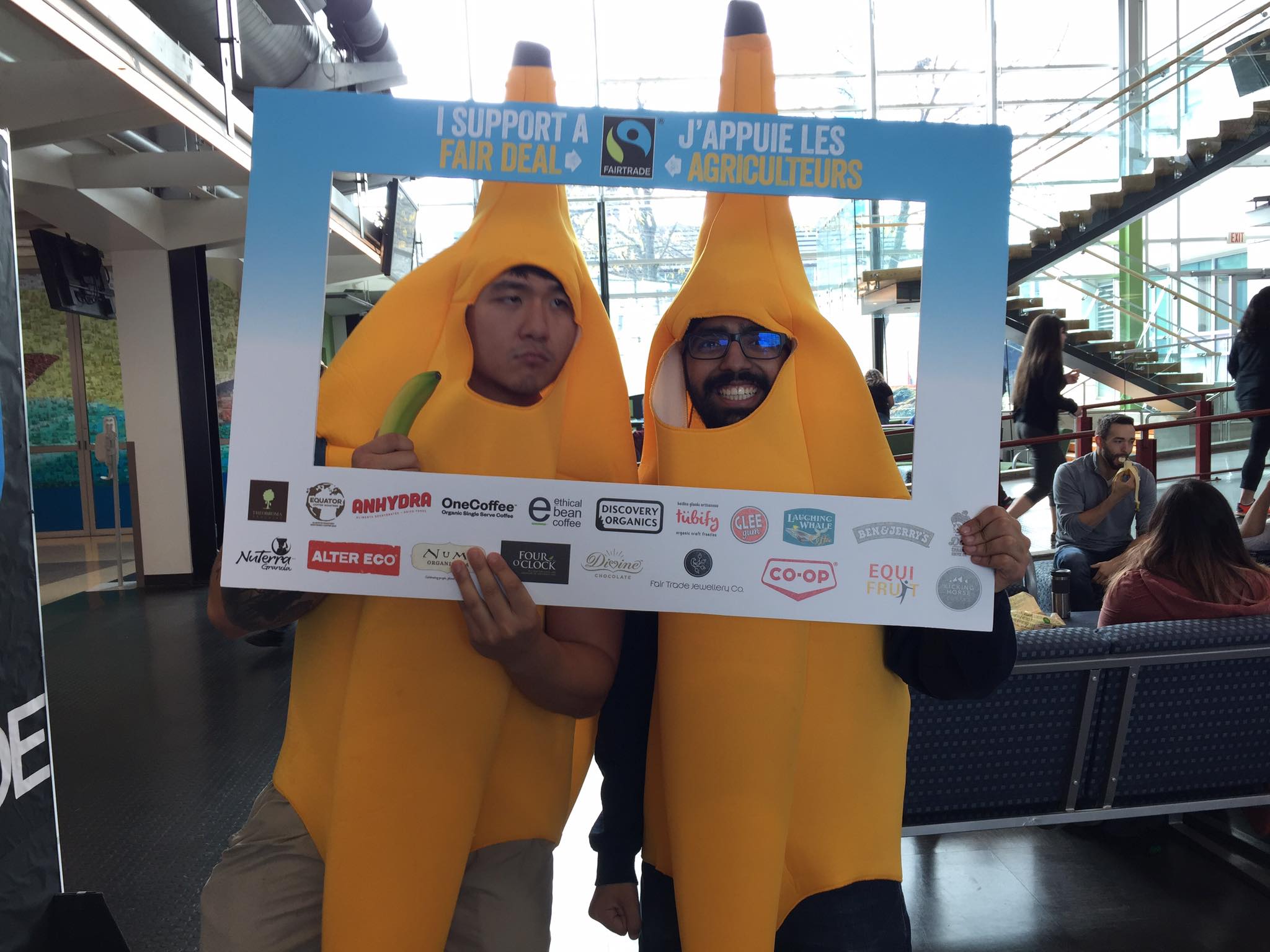 The BCIT Engineers Without Borders Chapter Initiative (EWB) could be seen promoting fair trade around campus last week. I was curious about why some of our engineering students such as Navtej Heir (electrical) and Mike Park (civil) were running around campus in banana suits!

So I connected with the EWB’s Fair Trade Lead, Stephanie Mulder to answer some questions. What I found was that there is a lot of thought and hard work that goes into promoting fair trade each year at BCIT and here is the inside scoop.

Spencer: What is the story behind the banana’s? Where did they come from and why are you giving them away?

Stephanie: Fairtrade Canada approached us over the summer, asking us if we wanted donations to help with Fairtrade Campus Week. Obviously we said yes! We got hooked up with the lovely people at Discovery Organics, a local company that imports Fairtrade fruits such as mangoes, and bananas, as well as a whole slew of other organic fruits and vegetables.

They donated us four boxes of bananas (around 350), imported from Asoguabo, an organization of small banana producers in Ecuador. Their Fairtrade premium ($1 US/ Box) goes towards improving farming practices, maintaining and improving a medical center for the farmers, and purchasing educational tools such as school bags and stationary for the farmers’ children. For us as consumers, this $1 US doesn’t affect us very much, but can make a huge difference for the lives of the thousands of people who farm under Fairtrade practices.

Spencer: The last couple years I have seen people playing soccer during Fair Trade Week. How can you tie in the Fair Trade Week sports day to fair trade?

Stephanie: A lot of people don’t think of Fairtrade as anything more than coffee, tea and chocolate. This is drastically not the case, and Fairtrade ranges from items like sugar, oil, flowers, fruits, cotton, gold, and of course, soccer balls! Soccer balls!?

Yeah, soccer balls! Around 70% (35 million) of the soccer balls produced in the world are from Pakistan, where people are paid poorly and work, often with their children, in terrible working conditions, hand stitching soccer balls for the sale in Western markets.

In these situations, Fairtrade aims to eliminate child labour, and to increase the working conditions of these workers. Stitchers are paid more per Fairtrade ball, often double (~$1 US), and of course, there’s a Fairtrade Premium that goes into schooling and daycare for the children of the workers. This eliminates the need for children to have to work, and gives them the advantage for accessible, low cost education.

On Wednesday, when we had our Fairtrade soccer game, we were playing with balls made by a company called Volo Athletics (previously known as Social Conscience) who imports Fairtrade soccer balls. Our freebies for the day were Tübify craft freezies, a local company who kindly donated some awesome Fairtrade, organic, vegan, real fruit freezies. They use Fairtrade products, such as cane juice, in their freezies, and we were so happy to be able to work with them to get some of their awesome Fairtrade products!

Spencer: What types of freebies did you give away? what do they have to do with fair trade?

Stephanie: All of the products we had to give out were Fairtrade certified, and donated to us through Fairtrade Canada. On Monday we gave out Bananas from Discovery Organics, Wednesday was freezies from Tübify, and Friday was gum from Glee gum, coffee pods from OneCoffe, tea from Numi Organic Tea, as well as $1 off coupons from Ben and Jerry’s and Tübify!

Spencer: Last time I was involved with BCIT EWB, they were a “Student Chapter Initiative” but were working towards being a full chapter. What is the current status?

Stephanie: EWB BCIT has been a full chapter since this past June. Being a full chapter allows us to participate in the Junior Fellow program. In the next semester we will be pursuing different fundraising sources such as faculty funding, corporate sponsorship, and a levy. So that we will have the necessary funding required to send BCIT’s first Junior Fellow next year.

Spencer: Any upcoming events that the EWB has planned?

We’ve planned a variety of events for the upcoming year, such as movie nights, Fairtrade learning events, pub nights, and of course our 3rd annual My Fair Valentine Fairtrade rose and chocolate sale in February. Hopefully by the end of the year we’ll also be able to host another Fairtrade soccer game, and we’re in the talks of having an ‘alternative’ Fairtrade Expo, for products we don’t necessarily think of being Fairtrade. If you have any ideas for events that you would like to see, we’re always up for more!