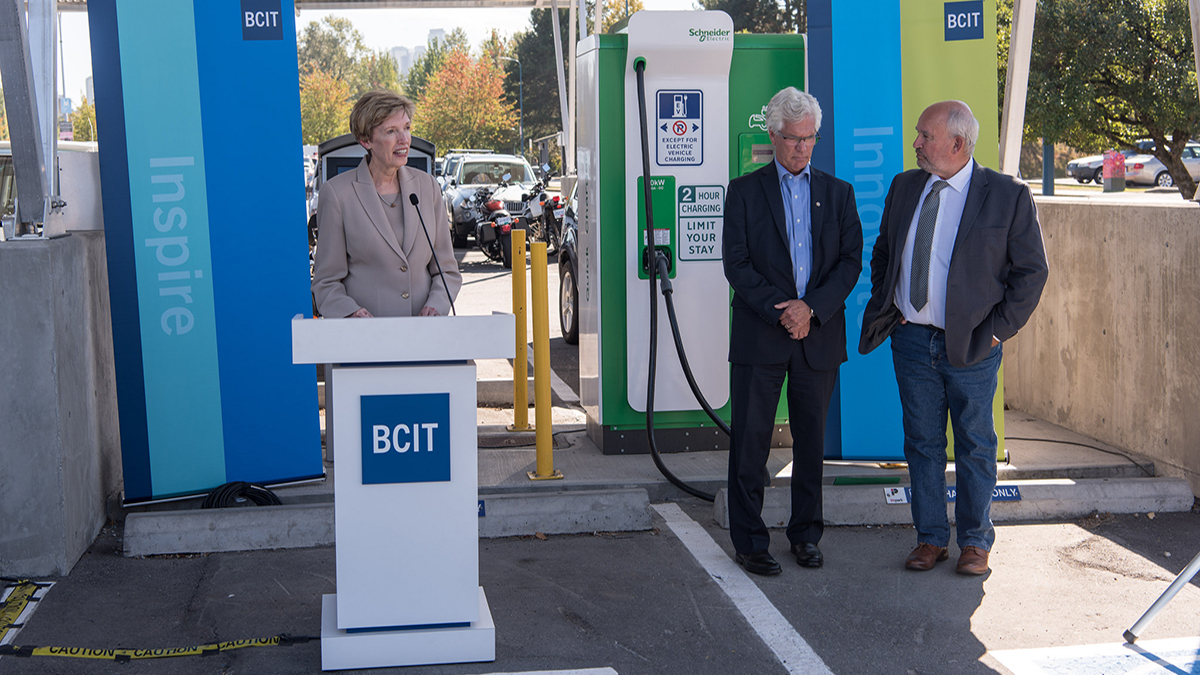 Officials today unveiled the ‘gas station’ of the future, the British Columbia Institute of Technology’s (BCIT) Energy OASIS project, which uses the power of the sun to fuel electric vehicles.

Last year, 98% of the energy generated in British Columbia came from clean or renewable resources. This project will support the ongoing modernization of the province’s electricity grid. The Honourable James Gordon Carr, Minister of Natural Resources Canada, and Minister of Energy and Mines Bill Bennett officially opened the Energy Oasis (OASIS) project today at the BCIT Burnaby Campus.

“The Province has a long history of supporting clean technology,” said Bennett. “Through BC Hydro and  B.C.’s Innovative Clean Energy Fund, this government has provided $4.7 million for the Energy OASIS project and the microgrid at BCIT that supports this integration of multiple technologies. Solar power is a clean and renewable power resource, and the more we can harness its potential, the better off we’ll all be. Funding for projects like this will ensure that B.C. is on the cutting edge of green technology.”

The OASIS project is part of BCIT’s Smart Microgrid system and collects solar energy through photovoltaic (solar) panels, converts it into electrical energy, and then stores it in lithium ion battery banks. An intelligent energy-management system plans the distribution of stored energy to power various campus loads, including electric vehicle charging stations at BCIT’s Burnaby Campus.

“This project is a demonstration of how clean technology can help reduce emissions, protect the environment and generate employment opportunities,” said Carr. “I congratulate the BC Institute of Technology for being early adopters of electric vehicles and their supporting infrastructure. Projects like this are a beacon of innovation in the Canadian clean energy industry, which our government will continue to support.”

The OASIS system components include:

“The Energy OASIS is just one example of how BCIT is innovating collaborative solutions to real-world problems,” said BCIT president Kathy Kinloch. “We’re building the blueprint for Canada’s future ‘gas stations for electric vehicles,’ as well as providing efficient, clean-power solutions for remote communities. Our partnerships with industry, the federal and provincial governments, and BC Hydro are vital to our work in delivering smart grid energy solutions at home and across the globe.”

At full capacity, the solar-powered OASIS system should be capable of generating over 142 MWh per year. Depending on how OASIS is configured, some of that energy will go towards supporting charging of electric vehicles, and some will go back into the BCIT grid to help offset costs of energy for the campus.

“British Columbia is a world leader in clean energy, with 98% of our system already clean or renewable,” said BC Hydro president and CEO Jessica McDonald. “Solar is a great part of our mix and the Energy OASIS project will make an important contribution to understanding the impact of new technologies on the grid.”

British Columbia leads Canada in market interest for electric vehicles and related infrastructure. The success of OASIS supports future growth of this clean technology. The project showcases the integration of renewables, energy storage, electric vehicle charging loads and intelligent controls in a microgrid environment. Additionally, the project could be replicated in the future to support electrification of remote, off-grid communities and the development of urban renewable-energy neighbourhoods.

The #BCTECH Strategy is a key component of the BC Jobs Plan to support the growth of B.C.’s vibrant technology sector and strengthen British Columbia’s diverse innovation economy. The multi-year strategy includes a $100-million BC Tech Fund in addition to programs and projects to increase talent development and market access for tech companies that will drive innovation and productivity throughout the province