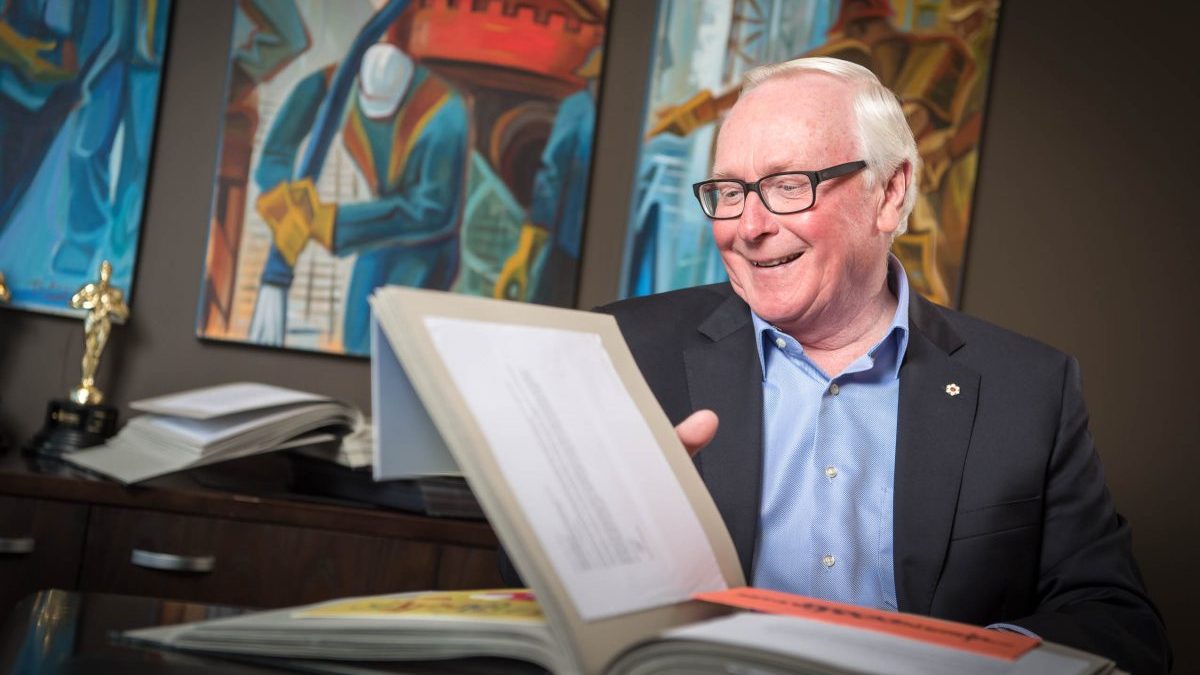 David Podmore sits in his boardroom, surrounded by the Georgie trophies his company—Concert Properties—has won over the years. He’s not looking at the building awards, however; he’s reading through a scrapbook. It’s one of five laid out on the table.

The carefully constructed scrapbooks are filled with hand-written letters, cards and photos.

For almost 15 years, Concert has sponsored bursaries to help students in the BCIT Trades Discovery programs. For as long, those students have sent Concert thank-you letters. Since receiving his first one, Podmore—the company’s founder and CEO—has been saving them. Each is carefully pasted into a leather-bound scrapbook.

“Your generosity will help ease the financial burden,” reads one letter. “Raising two wonderful children and being a single mother is cumbersome on my budget and your kindness has reduced that stress.”

The BCIT Trades Discovery program introduces curious students to a variety of skilled trades. There’s one set up for general intake and one specifically for women. The 16-week program allows students to explore 15 different disciplines, so they can find out which they like before investing in training and apprenticeship.

It’s a popular program. Recent Trades Discovery student, Joie Forget, says she chose the program because she wanted to change careers. She just wasn’t sure what she wanted to do.

“I’m a hairstylist and I’ve always enjoyed working with my tools,” she says.

Forget found several areas that excite her. “The program also helped me discover what areas I didn’t want to pursue,” she adds. In the end, she says, “welding peaked my interest. I didn’t know I had a passion for metal.” Forget has completed the program and will receive the $200 bursary from Concert. It will help her on the next leg of her journey to becoming a professional welder.

Forget will likely join hundreds of graduates that came before her in writing a thank-you card. The communal gratitude is well-founded. Concert Properties sponsors three separate bursaries at BCIT. In total, the company has given BCIT almost 1.5 million dollars ($1,472,698.64).

“The support BCIT has received from Concert Properties has been remarkable,” says BCIT President, Kathy Kinloch. “They have a wonderful sense of corporate responsibility, and that’s thanks in large part to David Podmore. He believes strongly in giving back, and in the transformative power of education. As a result, hundreds of students have benefited. We’re incredibly grateful.”

Of the money Concert has donated, 886-thousand dollars have gone to Trades Discovery, money that has directly helped 1,185 students. Eligible students are each given $200 when they complete the initial program, then another $1,500 grant when they enter construction-related Foundation or Technical Studies at BCIT. The criteria for both awards is financial need.

“Scholarships are not available [to skilled Trades students] the same way they are for the business school and things like that,” Podmore points out. “It makes a real difference so people can then complete. [That money] gets them over the finish line.”

Laura Quilty says the money did that for her—and in doing so, it helped her pull herself out of poverty. Here is her letter:

I wanted to take a moment to Thank You. In 2005 I completed the Trades Discovery Program through BCIT, I was one of the recipients of your generosity, and I wanted you to know how far I have come since that time.

Before I discovered that I could have a successful career in Trades, specifically Sheet Metal, I was a single mother of two, newly separated and times were difficult. I had gone to college after high school but once I was married and had children my plans of a career had taken a back seat to the immediate needs of taking care of my family. Life had not gone as planned and I found myself literally counting out my change at the grocery store so I could buy fresh fruits and vegetables for my children. I was working full time as a Car Detailer and had maxed out at a wage of $11.00 an hour; there was no room for advancement and our future looked very bleak.

Then, one evening, when things seemed at their darkest I stumbled across the BCIT website and found the “Trade Discovery” page. Apprenticeship sounded like a perfect solution to my situation. … Your gift specifically helped me purchase my first tool belt, hand tools and my boots and within six months I was working on a Job Site learning how to install Duct and had my Apprenticeship card in my wallet.

Since that time I have come a long way. I am a Red Seal Sheet Metal Journeyman and have worked on prominent projects. … I am very proud to tell you that I have also taught Sheet Metal at BCIT.

On a personal note, and to me the most important, two weeks ago I moved into the house I purchased. That’s a long way from digging in my change purse, looking for that quarter I needed if I was going to buy apples for my children.

Again, I wanted to say Thank You, I needed help to get over that “lip” and you helped me.

The students thank Podmore for the money. They might not realize they should also thank him for the existence of the Trades Discovery program itself.

“Well, it all started with a conversation with BCIT about getting young people engaged in pursuing careers in the building trades,” recalls Podmore. “A lot of people don’t fully understand the opportunities that are available in the building trades; so, that’s where the idea was hatched.”

“I’ll tell you a little anecdote,” he says. “I organized a meeting. I called all my friends in the various trades. So, I tried to have the president of a given company that would be in the sheet metal business or the welding and structural steel business etc. I managed to get one or two from each of the major trades and I held a breakfast in the Georgia Hotel.”

Along with then-BCIT President, Tony Knowles, Podmore hosted these captains of industry to talk about their idea.

“We talked about what it would mean,” he recalls. Then he asked for the cash.

“My numbers might be off, but I said, ‘What I’d really like before you leave the room is, I’d like each of you to make a commitment.’ I think initially we wanted 50 thousand [dollars] a year that would allow the program to start. I wanted everyone to make this three-year commitment, and everybody in the room did. It all really came out of a conversation.”

David Podmore—widely recognized as one of Vancouver’s most influential contributors to the real estate industry—comes by his enthusiasm for the trades honestly.

“My father started out as a tool and die maker and a machinist. He was a very excellent tool maker,” says Podmore. “A lot of people don’t even know what that trade is today. He ended up becoming an executive in the pipeline and pipeline construction industry. When I was a kid he used to take me to the job sites.”

Those early memories shaped Podmore’s life. “I worked in pipeline construction for eight years, was a heavy equipment operator and trained as a mechanic. I always think that combination of practical training, practical on-site experience, and academics is a fabulous combination. I think it’s a wonderful thing.”

“You know,” he adds after a pause, “we hear young people say, ‘Well, I don’t want to be working on the tools my entire life.’ They’re mistaken. The trades are a huge entry if you want to create your own company or you want to work with a company like Concert.”

John English was the Dean of the BCIT School of Construction and the Environment when the Trades Discovery program started. He was a part of the early conversations.

“I can certainly confirm David’s passion,” he says. “What struck me at the time was the far-sighted nature of the support. He knew this was a win-win for all involved and that it wasn’t only a philanthropic initiative. He could project the effects of the program years out. He could see the numbers of skilled and contributing tradespeople making good livings and contributing to the economy, and could see how this would benefit business and industry.”

That was in 2001. Last year alone, 112 people graduated from Trades Discovery.

A lot of the graduates now work with Concert.

“If you go to one of our job sites today,” says Podmore, “it’s really rare that I don’t meet someone on site that came through the program, and that did go on to become a completely qualified journey-person.”

“There are two guys I meet all the time,” he adds. “They had [various] problems. They were really young at the time. They both went through the plumbing and pipe-fitting program. They got out of their problems and have been on our job sites, now, for 14, 15 years.”

The impact of Concert’s support of the Trades Discovery programs is not lost on Program Head, Tamara Pongracz. She believes that while the money has practical benefits for students, what it says is worth more: “With this money, Concert tells students their decision to pursue a skilled trade is honourable and worthy of an award—that they are worthy.”

Pongracz’s students agree, but add that her leadership also went a long way in making them feel worthy.

Laura Quilty—the Red Seal sheet metal worker—recently emailed BCIT this message: “Tamara’s support and encouragement did not stop when I graduated from the program. She has been a driving force for me along my chosen career path all these years.”

Pongracz has been at the helm of the Trades Discovery programs since they launched.

“She was the obvious individual to run this,” says John English. “For starters, she had the right technical background—but more importantly, she has the right personality to champion a program like this. If a program is going to be successful, it needs someone like her to thrive.”

“In retrospect,” he adds, “we could not have found a better person to make this a success.”

“I don’t think I’ve ever really read one that reads like it’s forced,” he says smiling. “This is Tamara. I give her credit for this, you know, because she started this.”

Tags: Donors, School of Construction and the Environment, School of Energy, School of Transportation