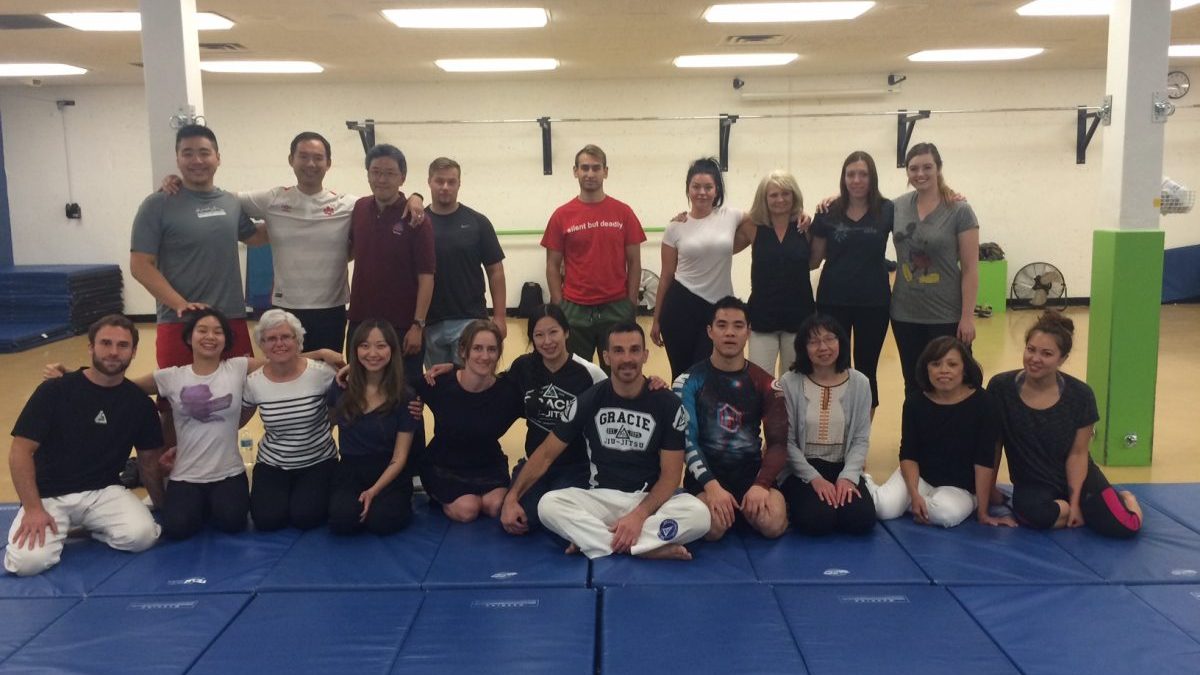 BCIT students, staff and faculty recently spent an afternoon throwing each other around.

The wrist grabs and ‘trap and rolls’ were all a part of a free self-defense class organized in a joint effort between BCIT and the BCIT Student Association. It was taught by instructors from North Vancouver Brazilian Jiu Jitsu.

In a mixed crowd of men, women, staff and students, the most polite person in the room was also the most dangerous.

“Please lie down on the ground,” instructor Marc Marins asked before climbing on top of a volunteer. Marc is a black belt in both Gracie Jiu Jitsu and judo. After he demonstrated how to get out of any particular grab, he always turned calmly to his partner and said, “thank you.”

The freckled half-Brazilian has competed in the World Championships, the Pan Am Games and the U.S. Open. He’s not a large man, yet he’s undeniably strong.

“The secret is not size,” he told the group. “It’s not about overpowering your attacker or big punches.” The key to survival, he says, is leverage.

He showed the captivated group how to use leverage to break free of a wrist grab or when pinned to the ground. He also taught them how to raise their ‘bystander intervention score’—how to increase the likelihood that strangers will help.

Screaming works. So, too, does increasing the time it takes for an attacker to get you from where you’re standing to the hypothetical white van. Using principles of jiu-jitsu, attendees were able to fend off people much larger than themselves.

This was made clear during a demonstration between Marc and Liz—another instructor, black belt, and his wife. Liz easily fought off the attack, using leverage and—clearly— years of practice.

The takeaway of the hour-and-a-half session was that there are ways to minimize the damage done to ourselves, and to the offender. The point is to get away.

That said, the BCIT staff and students who attended hope to come back for more.

“We have received a lot of positive feedback and it was great encouragement to expand the program,” says BCIT Student Association’s Hannah Bielert. “I hope we can continue this program and offer a couple sessions every school year.”

Two sessions have already been planned with Marc and his team for the fall.

On May 30th, BCIT’s Safety and Security team has another event planned that will help people protect themselves. This one, led by Burnaby city staffer and retired RCMP officer Chris Drouin, will look at what people can do to protect themselves.

These events are all a part of the Institute’s plan to help everyone on campus become Safety Wise.