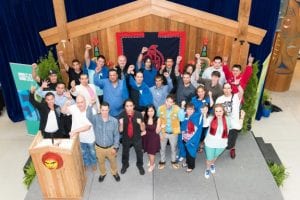 Last September, BCIT commissioned a local Squamish First Nations artist to design and carve a Housepost, to be installed in the lobby of SW1 as part of our 50th anniversary celebrations. On June 11, 2015 that vision was realized, and the Housepost was officially unveiled in a unique celebration that coincided with the BCIT Aboriginal Services Honouring Our Graduates ceremony.

On this special evening, over 200 guests honoured the Aboriginal role models who have achieved success and demonstrated leadership at BCIT and Aboriginal Services. The evening was also an occasion to celebrate the success of Aboriginal students who will be convocating next week.
Aboriginal families, BCIT staff, faculty, and students witnessed the traditional blessing and smudging ceremony of the Housepost and then celebrated as this year’s Aboriginal graduates walked the stage. 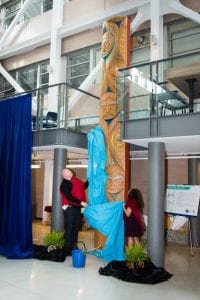 he Housepost represents the holding up of one’s home and serves as a reminder of the thousands of years of history and culture First Nations people have on the west coast.

The Honouring Our Graduates ceremony and much of the good work done by BCIT Aboriginal Services would not be possible without the generous support of Vancity, Ausenco, and Port Metro Vancouver.

BCIT acknowledges the traditional territories of the Coast Salish Nations of Musqueam, Tsleil-Waututh, Squamish on which our BCIT campuses are located.