Extensive green roofs were originally developed, tested and evaluated in the temperate climate of western Europe, which is typified by warm summers with frequent rains and cold winters. Eastern North America shares a relatively similar climate, if somewhat more extreme. The climate of the Pacific North-West, however, is dramatically different from both of these regions. Here, our summers are hot and dry, and our winters mild and wet.

In Vancouver and within the greater Georgia Basin and Puget Sound bioregion (ranging from Whistler in the north to Puget Sound in the south), population growth is yielding problematic runoff issues and unsustainable rates of energy consumption. In 1960 the region was home to 2.6 million people living and working in an area connected by sea, rivers, forest and mountains. By 1996, the population had risen to over 6 million, and by 2020 there may be an additional 3 to 5 million people. Fortunately, people are beginning to recognize that green roof technology can help address the problems associated with impervious urban growth. (Source: GVRD Livable Region Strategic Plan (1999)) 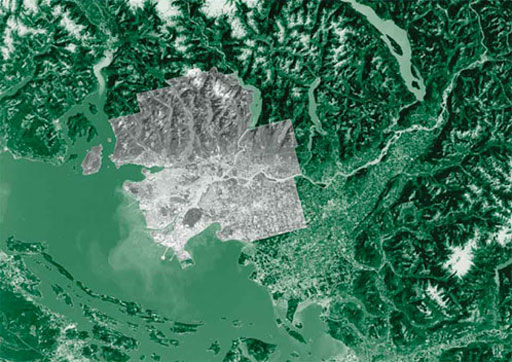 Metro Vancouver (highlighted area) is bounded by the Strait of Georgia to the west, Coast Mountains to the north, Fraser Valley to the east and the U.S. to the south.

Our next round of Green Roof and Living Wall courses will start in late-spring 2022. Check back around March for details on GROW 1000 (Green Roofs: Design, Installation and Maintenance).

On June 6th 2021, we celebrated World Green Roof Day for the second time, together with friends around the world. See the results from all the green roof love on social media by searching hashtags like #greenroofsbc, #wgrd2021, #greenroofs, #greeninfrastructure, #biodiversity, #urbandesign, @GRIT, @wgrd2021.