As cities become denser and food prices continue to rise, urban agriculture is a crucial element for happy people and healthy cities.

One of the projects on the Elevated Lab involves a collaboration with the head chefs of BCIT campus. Just as they are interested in growing fresh produce and herbs for their Friday menus, we are interested in making that happen on a roof that has minimal loading capacity. This is unfolding as this blog post is written, so stay tuned to see how it unfolds!

In the meantime, Christine gave an interview with CKNW about the Future of Farming, as part of their series on the Future of Work. Listen to it here.

In 2003, Vancouver City Council called for a just and sustainable food system, which led to the Vancouver Food Policy Council. Since then, Vancouver’s food policies and programs have taken root and flourished. The Vancouver Food Strategy is the City’s tool for meeting social, environmental, economic, and health goals. Some of the big milestones since 2003 include:

One of the first green roofs in downtown Vancouver, at Fairmont Waterfront, is in fact a roof garden. Since 1996, the ARC Restaurant has been growing herbs, vegetables, fruits and edible blossoms for their menus. Everything is organic. In addition to herbs like rosemary, lavender, bay leaves, and tarragon, the 2100 square foot garden grows garlic, kale, leeks, rainbow chard, carrots, peppers, green onions, strawberries, pumpkins and apples. Since 2008, the garden also hosts honeybees. Since 2015, this has grown to include four beehives with over 250,000 honeybees producing 125 lbs of honey on site. 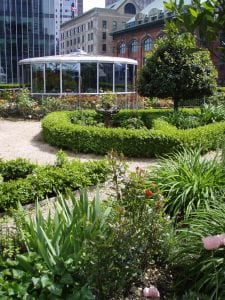 All our green roof and living wall courses courses have moved online, which makes them more accessible than ever! GROW 1000 (Green Roofs: Design, Installation and Maintenance) will run over 6 Wednesday evenings starting April 7th. GROW 2000 (Planting for the Pacific Northwest) will run over three Saturdays starting May 29th. Registration will open soon.

On June 6th 2021, we’ll celebrate World Green Roof Day for the second time! Join us and friends around the world in this global celebration of the many benefits green roofs offer people, society and nature. Share your love on social media and use hashtags like #greenroofsbc, #wgrd2021, #greenroofs, #greeninfrastructure, #biodiversity, #urbandesign, @GRIT, @wgrd2020.