I’ve come to the realization that I’m lacking a few life skills that i think I should have or at least know what to do. My dad has always been the one that takes care of it when I’m having car troubles, clog a sink or maybe accidentally light something on fire. But now I’m 21 and my dad isn’t always there when something goes wrong.

Yesterday, I left the dentist and there was a light on in my car. Having no idea what any of the lights mean, I just kept driving…until a song ended and I heard this loud banging coming from the back passenger side. My first thought was turn the music up louder. So I did. But then I got nervous. I went through the car manual at a red light and I saw that the low tire symbol was the same one that was lit up on my dash. Now this is where I could just go home and say to my dad “I think I have a flat tire,” but I was concerned that the tire was going to blow up and I was going to explode. So I decided I did not want to die and I would attempt to fill my tire up with air myself. It was about five minutes before I found a gas station. I pulled up at the “air” station and got out of the car like I knew exactly what I was doing… I didn’t. I’ve never done this before. I took the cap off the air valve and put it in my pocket so I didn’t lose it. I knew I would get in trouble if I lost it.

Now it’s air in the tire time. I grabbed the pump and put it to the air valve. Then I held the handle down and nothing was happening. But I thought “I guess this is how it works.” Three minutes later I realized that I’m an idiot and didn’t press the button to turn the air on. Nice move, Ry. I turn the air on and put everything back in place for filling. I held the handle down for about 20 seconds. I honestly have no idea if air even made it into the tire or if I let more air out. But I decided that I gave it a good shot and drove fifteen more minutes home. I called my dad to tell him what I did. I could feel him shaking his head over the phone as he said “be careful and drive home slowly.”

I did in fact make it home if you’re worried that I blew up. When I parked, I heard air sizzling out. I got down and saw that there was a huge nail suck in the tire. My dad came down to look and he stuck the nail in a little more so it would stop the air coming out for the night as it was 7pm and everywhere was closed. 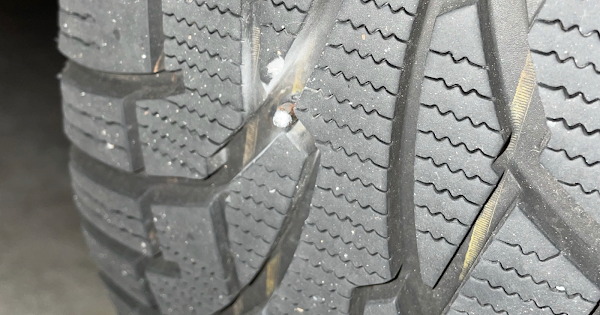 This morning, my dad took my car to get the tire patched as I profusely refused as those are boy things and as a girl I didn’t feel like getting dirty.

So what I learned out of this, is that everyone should know how to put air in their tire, add oil and know how to unplug a toilet. Not that I ever want to do any of these things, I should know how just in case my dad isn’t there. When I was in Kelowna and my dad was not there, a family friend (thank god he was there), showed me how to add oil to my car. Do i remember? Kinda sorta yes. I’d also like to know how to do my taxes so I don’t go to jail but I’ll learn that another time.