Last week, I wrote about my dog Stanley turning seven how I was going to make his Instagram content better than Peaches and Nacho Cilantro Passutto’s (Jillian Harris’ dogs). Did that happen? Nope, not even close.

The day started out great. He got his fancy new purple bow tie and was absolutely thrilled. He put on his crown and hated every minute of it. I snapped his picture as he looked at me humiliated. I didn’t want to torture the guy so I put on his blue birthday hat from the year before and he was pleased.

He went and saw Bean, a whippet and one of his dog BFF’s. Bean’s owner, K and I took the two to the dog park so they could run around. We ended up getting yelled at by two middle ages ladies who had an aggressive dog and it wasn’t allowed to be allowed other dogs. Why did they bring their dog to a park on a beautiful sunny day, with many people and other dogs around. That is the big question. They kind of ruined our vibe.

We didn’t stay long. Stan was exhausted and passed out beside a picnic table. For a seven year old Great Dane, it doesn’t take much for him to fall asleep. I did get great photo eating sticks with Stan. It was his special day, so I was going to do all the things he loved (I don’t recommend this). We ended up going home and Stan napped for most of the day, until he woke up with an upset stomach. 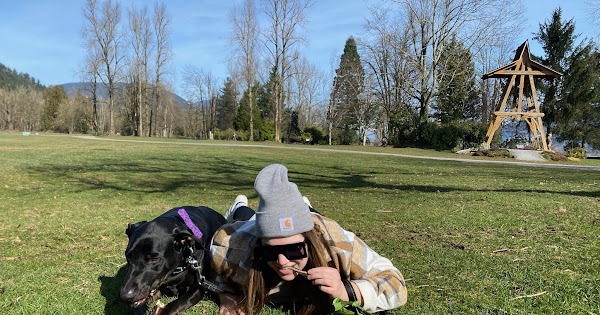 Stan and I eating sticks

The poor guy didn’t eat for two days. My parents were thinking it was because he was waiting for deer on top of his food (he was given some by a friend for his birthday) but that wasn’t the problem. Stan had gotten a parasite. As someone with a weak stomach, what was coming out of Stan was disgusting and I hope for it to never happen again. For him and me. Props to my parents for dealing with it as I was freaking out about him puking in my bathroom.

Stan was pathetic about it. He was upset. Crying. Not a happy camper. You know how dogs are when they don’t feel well, they are dramatic. Basically, like a man when he has a “man cold.” After a full seven days of antibiotics, special salmon wet food and canine probiotics, Stan is feeling much better. 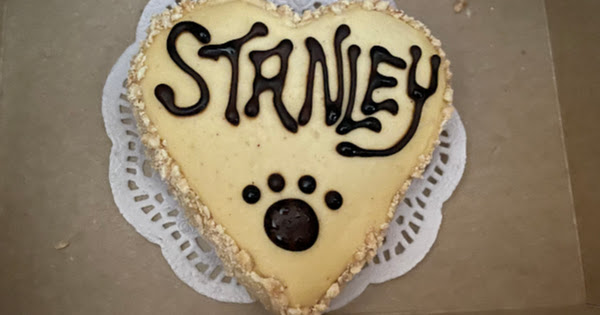 Unfortunately, his peanut butter birthday cake from Three Dog Bakery in Port Moody, is still in the freezer as we have been worried it will be too much on his stomach. Hopefully he can feast on it this week. Better late than never. He will have to have it before I take a bite out of it. It looks so good, but I’ve tried a cookie from there and it tasted… well nothing like it looked.

So what I have to say to Jillian Harris and her two dogs, is that next year, it’s on.

In the mean time, if you want more Instagram dog fails, check out Stan’s Instagram, @Stanley.Pierre_. You won’t regret it.