Justin Vernon, the soundtrack to your next workout? Ya, I was confused by this too.

Let me tell you a bit about Justin Vernon for those of you who may not know who he is. He’s the Justin Vernon of Bon Iver. I’ve heard the name “Bon Iver” over the past few years but I never really listened to them other than a few songs I’d hear on the radio from time to time. I definitely didn’t know the name Justin Vernon…until he appeared on Taylor Swift’s two surprise albums she dropped this year. Vernon co-wrote on, and as well as is featured on a few tracks. So, basically over the past six months, the names “Justin Vernon” and “Bon Iver” have stood out to me. Swift said in her Long Pond Studio Sessions, how she was nervous that Justin would not want to work with her because she is such a fan of his and it would break her heart if he declined. As one of the biggest artists in the music industry, if not the biggest, speaking so highly of Vernon made me want to find out more about him.

From Eau Claire, Wisconsin, Justin Vernon describes music as his religion, in that, it’s his way of understanding, celebrating and contemplation. Vernon loves his home town but they just might love him a little more. Many people in the city take pride in Justin. He was the creator of Eaux Claires festival along side Araron Dessner of The National, which Vernon has been the host of for it for the past two years. The city takes pride in having him as a symbol of their community. 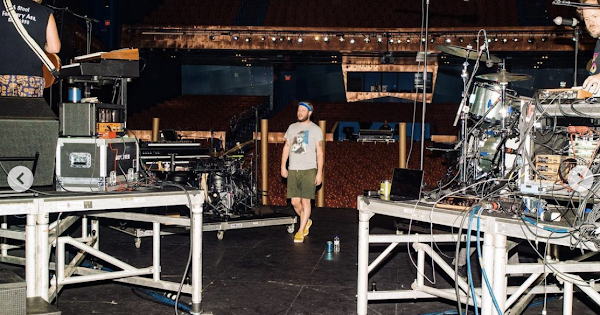 Vernon’s first band was DeTarmond Edison, when they broke up, he formed Bon Iver in 2006. The band has four studio albums along with two EPs. From featured songs on Grey’s Anatomy and One Tree Hill to world tours and two Grammy Awards as well as nomination at this year’s awards for exile, the band has been quite a success.

You likely wouldn’t expect Justin Vernon to be playing on the soundtrack to your next work out, but in a recent turn of events, has teamed up with  Eau Claire fitness instructor, Jeff Rogers. Vernon Tweeted about how Rogers was a mentor for him reconnecting with his body and mind and how he helped him truly understand his body. He says with Rogers “training, knowledge, care and attitude, he helps you look but more importantly feel better.”

Move More is a weekly YouTube series which is featuring original music from Justin Vernon, Francis Farewell Starlite and BJ Burton. Rogers came up with the idea as COVID put a stop to in person training. Being friends with the three musicians, it was a perfect was for him to create something new.

The first video of the series dropped on January 3rd followed by a second at the beginning of this week. I watched the first video as I sat on the couch drinking my morning coffee and stuffing my face with avocado toast, instead of participating. From a bystanders perspective, meshing the two together seems to work. I guess I’ll have to give it a try one of these days.

Rogers also has structured workouts and daily plans over a twelve week program. Visit his website to download them.

2020 was a busy year for Vernon with releasing two Bon Iver songs along with collaborating with Elsa Jensen, Jenny Lewis, Bruce Springsteen, and Jenn Wasner, He produced the new Swamp Dogg record as well as his work on Swift’s two albums. Let’s see what else 2021 will have in store for Justin Vernon.