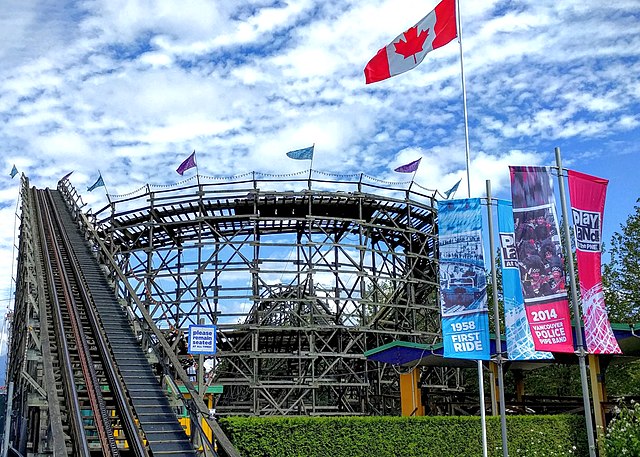 Standing tall on the grounds of the Pacific National Exhibition (PNE) is the 62-year-old Wooden Roller Coaster. The entire roller coaster, made of wood, is now the oldest operating wooden roller coaster in Canada. The reason why it is a Vancouver landmark is an interesting story that needs to be told.

Since 1925, 33 years before the construction of the Wooden Roller Coaster, the original landmark coaster in the PNE was called The Giant Dipper. Located near the west side of the fairgrounds, near where the Pacific Coliseum is today, it was the staple of many Vancouverites. When King Edward VIII (then the Prince of Wales) and his brother Prince George (later King George VI) rode on it in 1927, they liked it so much during their visit to Vancouver that they returned later in the afternoon to ride it again. In 1948, with the expansion of the Hastings Racecourse, the City of Vancouver had no other option but to demolish The Giant Dipper. This caused some backlash in young Vancouverites. It was during this time that the original amusement park on the PNE Grounds, called Happyland, had to be torn down as well.

With a crew of 300 workers, including a team of Norwegian shipbuilders, the coaster was made of specially treated fireproof Douglas Fir woods and started its first ride in 1958. At the time of its opening, it was the largest roller coaster in Canada and one of the two highest roller coasters in the world.

After another brief scare in which the city wanted to tear down the Wooden Roller Coaster, the city granted a historic plaque in 2009 and the American Coaster Enthusiasts awarded the coaster with the Classic Coaster Award and a Roller Coaster Landmark, the only coaster to win both awards. Today the coaster is an important icon of the Pacific National Exhibition and has even starred in movies like the adaptation of Stephen King’s book Riding the Bullet.

As more and more wooden coasters get torn down due to repair costs and the rise of steel coasters, PNE’s Wooden Roller Coaster has stood the test of time. It is no wonder why so many Vancouverites love to ride it when they are at Playland.

Have a front-row seat on the Wooden Roller Coaster right below: