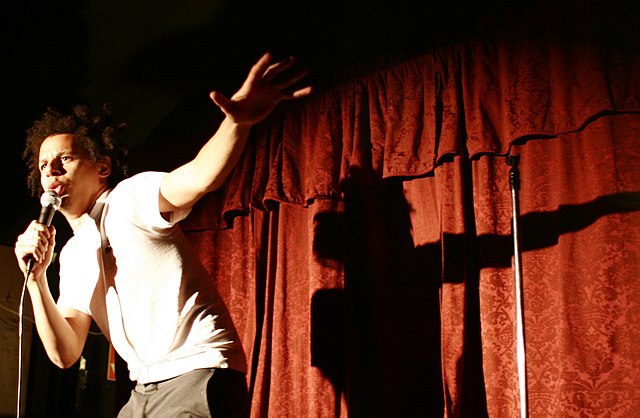 Comedian Eric Andre does things a bit differently. His form of comedy, which is  surrealist comedy, can be quite confusing for some. But that’s the best part! Because all of the jokes are not supposed to make any sense! Eric is the host of the late-night talk show, The Eric Andre Show, on Adult Swim. Unlike conventional late-night talk shows, which mainly focus on interviews between the host and the guest, Eric cranks it up a notch.

Every episode begins with the most iconic moment of the show, Eric’s entrance. After the announcer reveals the show’s name, Eric would completely trash the set. Some antics that he always pulls off are, breaking his desk, tackling the house band drummer and even destroying the set’s bookshelf. The chaos sometimes would have some celebrity cameos. Below is a 40-minute supercut of all of Eric’s Entrances.

Eric is extremely nihilistic towards his former co-host, Hannibal Buress. During the opening monologue, Eric often struggles and is sometimes reluctant to speak. As the monologue goes on, he becomes defensive even going to the point where he makes fun of Hannibal.

Between the monologue and his celebrity interviews, Eric loves to prank unsuspecting New Yorkers. He’s known to play different characters on the street, including a ranch dressing obsessed stoner who makes people feel uncomfortable through his gibberish sayings and absurd antics.

As for his guests, Eric would cause chaos on set and confuse his guests to the point that they think it’s all just a fever dream or be puzzled as to why their publicist even booked them to be on his show. Some notable guests on the show include Jack Black, Tyler the Creator, Queer Eye’s Jai Rodriguez and celebrity psychic Tyler Henry.

Besides his talk show, Eric is known for other outrageous stunts. One of the most infamous stunts was infiltrating the 2016 Republican National Convention in Cleveland, Ohio. It resulted in him being kicked out by security and getting his press pass revoked.

The subgenre of surrealist comedy, which most shows on Adult Swim fall under, is often seen by older generations as absurd. That’s because there is no answer to the joke or situations are just incomprehensible. Right now, internet culture is obsessed with randomness. Alex Prong, a sociologist at Western University, said that the show “can act as a motivator for [young adults] experiencing ‘dark times’ and embracing nihilism.” That’s what culture is all about right now! Just turn off your brain and enjoy the ride!

Season 5 of The Eric Andre Show available now on the Adult Swim channel and Amazon Prime.

EDIT: Due to copyright claims from Warner Brothers, the previous clips with the late Naya Rivera and the John Cena intro have been removed due to the channel associated with it being terminated.