It’s kind of a shame that the actual holiday is on a weekday, meaning it’s probably not a good idea to get wasted (unless you’re on break). I’d like to say it’s business as usual this year, but the shadow of #COVID-19 looms over the holiday season. Vancouver being Vancouver doesn’t show nearly as much paranoia as some countries (*cough* South Korea *cough*) but you can TELL there’s something wrong. There’s stress in the atmosphere; it’s not unlike a nationalist regime, trying to prove you’re in and turning in traitors to prove so. That said, the number of people in public functions haven’t changed, and nobody’s wearing masks or nervously rubbing hand sanitizer (remember guys, 60+% alcohol) after the slightest contact.

Not a single mask, a bottle of hand sanitizer, or cough in sight.

That’s more than I can say for Ireland as they have decided to cancel this year’s St. Patrick’s Day parade, and moving on to a new phase of countermeasures. I mean we aren’t going to have one, but that’s nothing new. But that shouldn’t stop us from having fun! Is there any other time of the year where we can add green food colouring to everything and be sanctioned for acting like an idiot (don’t say Halloween)? But how did a feast day for the patron saint of Ireland turn into one of the most meme-able and commercially successful holidays in the world? He’s celebrated every year in South Korea, which he has no direct connection to aside from religion. It turns out God really is the best manager (see ERB’s Joan d’Arc); a lot of His boys and girls turn out very well publically.

St. Patrick’s Day (March 17), is the feast day (designated holiday) of the saint who converted Ireland to Christianity. If there’s ever been a Christian who deserves a holiday, it’s him. He wanted to go back to Ireland even after Irish raiders sold him into slavery, and he had to spend his 22nd birthday dreaming of home. After Patrick finally made it back home, he decided to follow in his father’s and grandfather’s footsteps and studied Christianity. A few years later, he decided to go back to Ireland as a missionary but there’s a bit of a controversy involved. He claims he made the decision thanks to “a vision”, but this coincided with a court case that accused him of buying his way to Ireland for gain. Whichever you believe, how anybody can start a lifelong duty because of a fan letter in a dream is beyond me. Doesn’t matter if a celebrity (Victoricus) gave it to me.

As far as the records are concerned, St. Patrick was a pretty cool guy. He wasn’t too pushy, and he respected local pagan faiths. It’s possible he just didn’t want to be the next martyr to die for the job, but it worked in his favour. He was pretty well received, probably because God doesn’t demand sacrifices and people liked his gifts but even he wasn’t without enemies. According to local customs, not accepting gifts from kings makes him nobody’s friend so no official aid. He ended up in chains at least once, and King Coroticus kidnapped/executed his converts. Some royalty did eventually warm up to him and provide him with the money and resources necessary to establish monasteries, churches and schools; it turns out it’s pretty easy to get the support of parents after you become best friends with their children.

Historians aren’t exactly sure when he was born or when he died, but it’s generally believed that he died on March 17. You may have heard some stories of that say he isn’t actually a saint, but that’s mostly based on the fact that he was never canonized by a pope. The Catholic Church didn’t establish actual procedures until centuries later, but he was treated as a saint by the majority of Ireland by the 7th century. Most major branches (including the Roman Catholic Church) later recognize that he is a Saint In Heaven. Most of the common cross variants you’ve seen can also be used to symbolize him such as the Cross Pattee or Saint Patrick’s Saltire.

Probably the most famous cross in video games.

Everything that was described so far doesn’t seem to match your idea of St. Patrick, does it? That ginger-haired weirdo in green with shamrocks all over, jumping around like an Irish Peter Pan. Over the years, the Irish have gotten so used to his presence that a lot of them even think he was born Irish. It also doesn’t help that people don’t go to church so often anymore, leading to some folks (especially us) thinking that ginger imp is him.

It’s probably disrespectful, but there’s no stopping it.

Like any self-respecting legend, there are plenty of stories surrounding St. Patrick. The source of the ever-famous symbol of his holiday, the shamrock (flower of Ireland), originated from a story where he was trying to explain to an unbeliever what the Holy Trinity is. He described it as a whole that’s made up of three distinctive parts, like the shamrock. Other stories include driving all the snakes in Ireland into the sea (there never were any), preaching for so long that his walking stick turned into a tree, and trying to convert legendary Celtic warriors.

He even has a colour named after him. As an avid fan of blue, I’m jealous!

As with most sensations, it was the (Irish) Americans who made St. Patrick’s Day into what it is today. The ones who achieved political power made sure the celebrations were big, the parades bigger! You can tell the planning committees back then went all out, spamming shamrocks left and right and turning all manner of food green. Traditionally, the Order of St. Patrick from the Kingdom of Ireland used sky blue because green and dark blue were taken. This made the first celebrations blue-themed, but the marketing genius of America convinced even the Irish to eventually use green too. 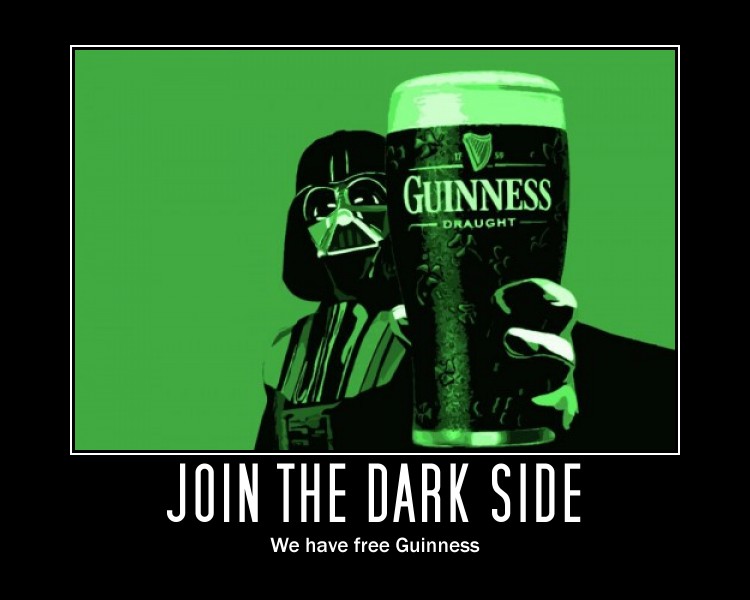 This is yet another example of how the capitalist market wrestled control of a holiday from the hands of Christianity, we should fervently worship our robot overlords (lol)! Jokes aside, St. Patrick is a good man to learn from and celebrate even if you’re not Christian, his work ethic and respect is praiseworthy. Even though his feast day doesn’t tell much about him anymore, it is still a good device to preserve the Irish identity alive no matter where the Irish may be. At the very least, it celebrates our love for Guinness in Irish (or just regular) bars all over the Greater Vancouver area. Thank God the CelticFests in Surrey or Vancouver are still green-lit.