In case you didn’t know, Canadian singer Daniel Caesar is currently on his CASE STUDY: 01 TOUR and performed TWO nights here in Vancouver! He performed this Wednesday (November 27) and Thursday night (November 28) at the Doug Mitchell Thunderbird Sports Centre at UBC. 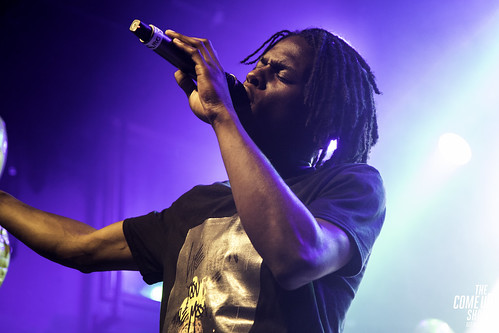 Which night did you attend?? Did you miss out??

Well, that’s why I’m here! Take a seat, listen to some Daniel Caesar, and get ready because I’m here to talk about the show for you. I’m gonna mention my favourite parts, what I thought really stood out, and just good moments.

Okay, so I’m gonna start off and say that I’m not the biggest Daniel Caesar fan out there. I only know a few songs but that night, it didn’t matter how many songs I knew. His music is one of those kinds where whether you know it or not, it’s so easy to get lost in and just vibe.

Let’s talk visuals for a bit. The lights really stood out within production as the whole stage set up is two background screens and Caesar. My favourite part about the whole visual aspect was the way his band was shown. Like when the first song played, I wasn’t sure if it was just instrumental or an actual band playing. The way they were introduced was through silhouettes in between the two screens, making it really epic and mysterious.

Okay moving onto performance! His vocals sound the exact same as it would on a recording, which is such a treat to hear live. His high pitched and passionate tone is beautifully echoed throughout the arena. In my opinion, the best part of the show was the bit he performed with his acoustic guitar. For a few songs, it was just him and the guitar and it felt super intimate.

Let me give you an example. When you close your eyes, picture him in your living room just sitting in front of you. He beautifully strums the guitar as the instrument and the sound of his voice echoes around the room. That’s the feeling I got during this part of the show. Chills just everywhere.

My favourite songs of his are Get You, Best Part, and Blessed, so here’s a quick review of these performances.

Get You – I’ll be super honest, Kali Uchis really stole the show for this one. She wasn’t physically there but through the background screens, she felt present as they played a video of her dancing along while Caesar performed. It was a very intimate dance as she was swaying along and really feeling herself and you can’t help but feel more concentrated on Uchis than Caesar. Don’t get me wrong though, Caesar really delivered to this song as well!

Best Part – Of course, the song that everyone knows! Probably the only song most people came to hear live and hey, no judgement because I feel that. It might’ve been one of the only songs where the arena really came together and you could really hear Vancouver sing louder than Caesar himself.

Blessed – The song I was really excited to hear, and he did not disappoint. It was a very simple performance with just a small stray of light shining down on him as he sang. We can’t ever forget the beautiful way the piano echoed throughout the arena. I can’t even explain how good his voice was because you can really feel the emotion all throughout. Blessed is really one of those songs where it just makes you feel so well overall and grateful for everything you have.

And due to the fact that we were the last tour date of the CASE STUDY: 01 TOUR, I feel like we got so much more than any other city. Caesar was very open and super grateful to the fans that came out. I believe we got an extra song or two for the encore, and in the end, it just felt like a big party because he celebrated the end of the tour with us. He even said, “It’s literally just for us now, we’re just having some fun up here.” To which I respect because I’ve never seen an artist that’s super humble and grateful to his fans AND just have a good time being himself on the stage.

To conclude this whole review, I would give this show 4 out of 5 astronaut suits! If you ever get the chance, I would definitely go see Daniel Caesar live. He will not disappoint and his talent will just send chills down your spine! CASE STUDY: 01 TOUR IS APPROVED!