World Rivers Day is an annual celebration of the world’s waterways.

Having celebrated its 15th anniversary in 2020, this day highlights the many values of our rivers, strives to increase public awareness, and encourages the improved stewardship of all rivers around the world. 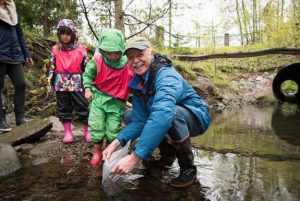 Initially founded as BC Rivers Day in the 1980s by the BCIT Rivers Institute’s own Mark Angelo, Rivers Day has since expanded to be recognized and celebrated all around the world. In support of the United Nations Water for Life Decade, World Rivers Day was established to create awareness surrounding water resources and the need to protect them. Since then, the world has been celebrating our waterways on the fourth Sunday of every September.

In the words of Angelo, “rivers are the arteries of our planet; they are lifelines in the truest sense.”

Rivers and waterways are often how cities come to be. Having a body of water within an urban region provides access to water, transportation, and overall positive contributions to mental well-being in humans. From an ecological standpoint, rivers, streams, creeks, lakes or other, provide habitats and migration routes for many species, such as bird or fish populations. In doing so, rivers contribute to often needed higher biodiversity levels in urban areas.

Having filtering abilities, rivers can contribute to drinking water in some geographical locations, and provide protection from natural disasters such as flooding in cities.

Guichon Creek runs through the BCIT Burnaby campus and is an example of one of these waterways. The campus is situated in the Brunette River watershed with Guichon Creek running from the south end of campus to the north and ultimately draining to the Fraser River and Pacific Ocean. The Brunette watershed was historically full of fish, such as salmon and trout, and functioned as important wildlife habitat.

During the 1920’s Guichon Creek was still a vibrant part of the ecosystem, and people could catch fish along its banks. From 1930 to 1960 the creek was urbanized and the lower half was culverted, travelling underground through the north-east quadrant of the campus. In the 70’s and 80’s restoration work began at the south end of the creek. Students and staff from the School of Construction and the Environment’s (SOCE) Fish, Wildlife, and Recreation (FWR) and Ecological Restoration (ER) programs have worked for 25 years to restore the creek by following Ecological Restoration best practices. For Guichon Creek this involved re-establishing streamside vegetation, enhancing in-stream habitat, and improving water quality, with help from donors and the City of Burnaby. Now a successful example of urban stream restoration, and sensitive habitat for fish and wildlife, the creek was even repopulated with cutthroat trout in 2006.

As restoration efforts continue, so will the ecosystem services provided to the region. Upstream, at the south end of campus, the City of Burnaby started work in September 2021 to replace the old Guichon Creek pipe culvert that runs under the Deer Lake Parkway so fish can actually pass through it. The new culvert will have a natural bottom that will reestablish fish passage.

Rivers are also some of the biggest carriers of plastic pollution, which is why it is so important to keep them clean and waste free. In support of World Rivers Day, Angelo has one piece of advice: go to a river, creek, or stream—and do it with a kid.

No feed found with the ID 1. Go to the All Feeds page and select an ID from an existing feed.