The Distributed Power Connections Study will also include a plug-in hybrid electric vehicle. 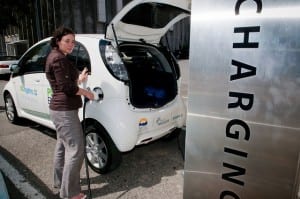 The vehicle’s internal combustion engine is combined with batteries that can be recharged by plugging into a general power outlet. The intent is for this component of the project to gather data on retrieving electrical energy from the vehicle and returning it to the grid during peak demand and recharging the battery during off-peak hours. The plug-in stations have been installed directly beside AFRESH Home.